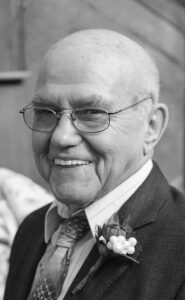 MICHAEL BARON, beloved husband of Marie Baron of Coaldale, passed away at Taber long term care centre on December 30, 2020, at the age of 87 years after a short battle with cancer.

Besides his loving wife, he is survived by James (Linda) Baron, Kevin (Kathy) Baron, Laura (Mike) Baron, Leanne (Randy) Warnock, Lisa Baron, 10 grandchildren and 7 great-grandchildren. He is also survived by his brother Nick (Linda) Baran along with various nephews, nieces and their children.

Mike was born of Ukrainian immigrants on September 1, 1933, in a remote sod shack near Rama, SK. He was the fifth of 4 brothers and 2 sisters. Mike reluctantly attended a one room schoolhouse near Stony Plain, SK, where he nearly completed grade 7. He told us of years of hiking through the bush in 3 feet of snow, uphill both ways. Personally, I think he just got tired of the snow.

Over the years Mike held such diverse jobs, among others, as farm labourer for his brother-in-law and his uncle, working for INCO in Thompson Lake, MB, Atlas Brush Company in Winnipeg, building bridges along the Trans-Canada highway near Banff and Lake Louise, Ellison’s Flour Mill in Calgary and maintenance man at the Norseman Motel, also in Calgary.

It was at the motel restaurant that he met the prettiest waitress he’d ever laid eyes on. At first Marie resisted his charms, but he was persistent and eventually won her over. Mike and Marie married in Calgary on October 29, 1960. In 1961 they moved to Milk River where they proceeded to take over the Wachtler family farm. In addition to their 5 fabulous and talented children they raised weeds, gophers and field mice. In a good year there was also grain, hay, cattle, hogs, horses, chickens, turkeys, dogs, cats, quill pigs, howly-dogs and various other critters.

After nearly 40 years of dirt ranching Mike and Marie retired to Coaldale in 2000.

Mike’s stories will be missed the most.

A Celebration of Life will be held down the road.

Thank you all for your kindness, generosity and support.