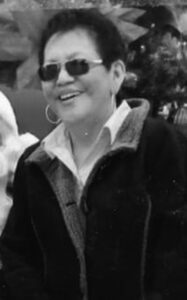 It is with heavy hearts we announce the passing of Julianne, beloved wife of Philip Wolf Child Sr., loving mother to Philip Wolf Child Jr and Cynthia Wolf Child and adopted mother to Gwen Heavy Runner and Jackie Black Water. Cherished grandmother to Shanyce, Brooklin, Oceanna, Celsa and Keisha, Jonothan; great granddaughter Reagan Black Forehead. Julianne passed away @ Chinook Regional Hospital peacefully after a lengthy illness with her loving husband Philip Sr. By her side. Due to covid a limited amount of family and friends could visit.

The Celebration of Julianne’s life will be held on January 9, 2021 @ Legacy Funeral Home in Cardston Ab. between 9:00 – 11:00 am allowing 10 people at a time to pay respects then the funeral service will begin @ 11:00 am burial to follow at St. Catherine Cemetery Blood Reserve AB.

Julianne was born on November 28, 1951 in Lethbridge to Willie and Mary Eagle Plume, she was raised in Bull Horn Area and was a member of the Many Children and Little Shawl Clan. She attended St. Mary’s Residential School then Glenwood School, she also attended Bow Island School. In 1971 she met her beloved husband of 50 years and they started their family with their 2 children Philip Jr and her baby Cynthia. Julianne was a devoted wife and mother she was a protective mother and family was so important to her, some of her employment included the Detox Centre in Fort Macleod, Ab the Arts and Craft Store in Standoff, Cleaning in Elders homes. Her and Sr as she called her husband became Foster Parents in 1987 up until 2006. Julianne and Sr have a gift of spiritual healing and have helped numerous people gaining so much respect. Up until her illness she did everything for her family she was our world. She was such a beautiful person inside and outside, kind and humble. She was also so humorous and had such funny stories she was the heart of our family. She helped her children raise her precious grandchildren from Celsa to Shay (her favorite) and her Nook and Oc. Her granddaughter Shay returned her love and took care of grandma up until her passing, she never wanted to leave her side and would drive for her and treated her as her child. Mom was so grateful for her, Sr and Jr. who also helped care for her, also her baby Cynthia and Keisha. During her last months she relaxed on her couch with Sr and would watch wrestling. She also enjoyed watching Simpsons with Shay and Ridiculousness with Jr. Her hobbies included crossword puzzles, reading and playing scratch tickets, she loved travelling and getting popcorn. She loved animals especially her cat lil Bastard and Shays cat Elvis, before her passing she loved powwows and dances and just being our world, she had a heart of gold and will be greatly missed.

The family apologizes for any names missed and are so grateful for all the heartfelt condolences and donations.