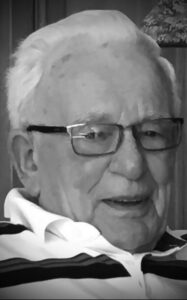 RALPH OSTENBERG (Roelof Oostenbrug) of Milk River, AB, beloved husband of 63 years to Karen Ostenberg, passed away peacefully, at his home on January 12, 2021 at the age of 88 years.

Ralph was born in Friesland, The Netherlands where he grew up on the family dairy farm. At the age of 18, he ventured to Canada where he started his dreams of working in agriculture in Granum, AB. He moved on to work various other jobs including installing the sewer lines down 16th avenue in Calgary, oilfield service & working for CP Rail before attending SAIT, taking heavy duty mechanic. He then went back to farming by working as a hired hand in Del Bonita.

In 1956, he returned to The Netherlands for a visit where he met Karen and they married a year later. They lived the next few years in Del Bonita, then Foremost before settling in Milk River in 1960. Ralph initially helped to build the Milk River Post Office & doing some plumbing jobs before following his passion in the agricultural field by starting what is Milk River Farm Supply today.

He enjoyed many activities over the years, especially golf and a would never turn down the challenge to a game of crib. He loved playing cards with his family and welcomed the opportunity to “school” his grandchildren at crib anytime.

Ralph was an advocate for many small businesses and supported many organizations in the Milk River area. He will be missed by family & friends.

Besides his loving wife Karen, Ralph is survived by his 5 children and 10 grandchildren,

There will be a private family service.

Special Thanks to Dr. Krog & the staff of the Milk River Health Centre, the special ladies from CBI-Greystone that kept dad on his toes these last few months, Dr. Razavi & Katie from the Jack Ady Cancer Centre, the Lethbridge Regional Hospital and those that checked in on him regularly.