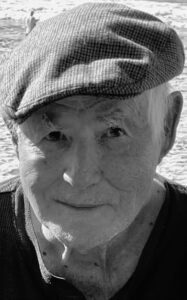 Robert Cecil Harrison, 95, of Coaldale, Alberta passed away on February 19, 2021. He was born on his folks’, Cecil and Pearl’s homestead in southern Saskatchewan, and attended the one room Pony Butte School.

Bob was humble about his WWII service. He signed up with the Canadian Air Force when he was just 17 years old and ended his commitment 3 years later with the Army after serving at the Battle of the Bulge.

In 1949 he moved to Coaldale with his bride-to-be, Lorene (Jahnke) where they built their lives and their family over the next 72 years. From construction foreman to liaison for the local Member of Parliament to managing his acreage on the edge of town, Bob was industrious. He served as the lead in building the sanctuary of the Coaldale United Church, supported the development of the Birds of Prey Foundation and was active in politics. In his leisure time Bob was an avid fisherman and hunter, the upshot being listed in Boone and Crockett for a Caribou in 1987. His later years gave rise to a stunning rose garden honoring his English roots, beekeeping resulting in delicious honey and tending his hobby farm.

Bob believed in people having opportunities for education and he took pride in every one of his 14 Grandkids having attended college. More importantly, he believed that the best education was to travel. His message was “Travel, see the world, meet people. This is how you really learn.” Having circumnavigated the globe three times on the Semester At Sea ship, Bob travelled to 50 countries and had endless tales of adventures that he shared in a delightful and animated style.

Above all else Bob was a practical man, hardworking, always up to the task at hand. Over the decades he happily built 3 homes for his family and “I never missed a day of work doing it!”

Integrity and Bob’s gentle way of being leave a wide swath having influenced and inspired many friends and family members. He loved to visit with folks and was openly respected and admired.

Bob lived fully, with curiosity and wonder to the very end. Until a week before he passed away, he and Lorene spent three months enjoying zodiac rides to see dolphins, whale watching, regularly touring a bird sanctuary estuary and relaxing with sunsets while living on the beach with family in southern California. As Bob quipped the night before he flew back to Alberta, “It is hell to be old but I had a good time getting here!”, concluding it had been a good ride.

The family kindly requests in lieu of flowers, please make a donation to the Birds of Prey or a charity of your choice. Thank you. A Memorial gathering to celebrate his life and stories will be held when family and friends can safely gather. Bob lived to be 95. He’d likely shrug and say, “What’s the rush?”