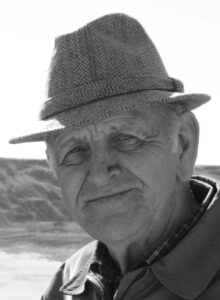 CORNELIUS “KEES” UYTDEWILLIGEN passed away peacefully at the Chinook Regional Hospital on Wednesday, February 17, 2021 at the age of 89 years.

He is predeceased by beloved wife Francis, son Andrew and daughter-in-law Kim.

Born on September 23, 1931 in Halsteren, Holland to Marinus and Henritte, Cornelius grew up on the family farm with twelve siblings and later served as cook and sharpshooter for the Royal Netherlands Army. He married Francis on February 4, 1959 and made the long journey by boat and train to start a new life in Coaldale, Alberta, soon after.

Cornelius was known as a hard worker, having held many jobs to feed his family. He worked as a hired-hand, sanded drywall for home construction, and milked cows for the Lethbridge Research Station while establishing his own hog operation and sugar beet farm. Volunteer work was significant in Cornelius’ life; he started the Coaldale 4-H Swine Club with several other parents in the area and served as a Fourth-Degree-Knight of the Knights of Columbus. Religion was also an important fixture; as a devout Catholic, he sat on several boards for St. Ambrose Parish and served as an usher and minister delivering communion to the sick.

After retiring in his 60s, Cornelius filled much of his time gardening with his wife, visiting and touring around family from Holland, and lovingly teasing his many grandchildren who called him “Opa.” He would move to Lethbridge in 2011, and spend his final years in St. Michael’s where he would battle numerous health ailments including a lengthy struggle with diabetes.

Cornelius is remembered as a gentle and easygoing man; well liked by many in the community. Often referred to as an “instigator” by many members of his family, thanks to his playful and humorous spirit; he will be sorely missed by all who knew him. His much-enjoyed words of wisdom “big man at night, big man in the morning” have and will live on for many generations to come.

The family would like to thank the staff at St. Michael’s Health Centre for their dedicated care over the past four years – particularly through this difficult time.

A Memorial Mass will be celebrated on Monday, March 1, 2021 at 10:00 A.M. with Father Ian Gagné celebrating. The Mass will be live streamed and may be accessed via Case’s obituary on the Cornerstone website.

Case will be laid to rest in the Coaldale Cemetery during a private Family Graveside Service.

In lieu of flowers and in memory of Cornelius, donations may be sent to St. Michael’s Health Centre (1400 9 Ave South, Lethbridge, AB, T1J 4V5).

One Condolence for “UYTDEWILLIGEN, Cornelius”