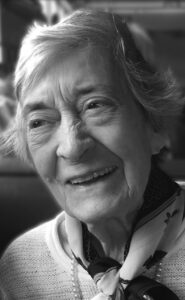 BETTY MORTON REID (née Lowe), beloved wife of the late Robert Reid, of Lethbridge and formerly of Millet, AB, passed away peacefully surrounded by family at Cedar Creek Adaptacare on Wednesday, February 17, 2021 at the age of 98 years.

She is survived by her three children: Michael of Vernon, BC, David (Johanne) of Lethbridge, AB and Heather of Phoenix, AZ. She is also survived by her four grandchildren: Jonathan, Cecilia, Frances and Jacob as well as several nieces and nephews.

Betty was born in Derby England, where she worked as a office clerk and eventually served for the RAF during WW2 as a plotter. She immigrated to Canada in 1950 and married Robert in 1955, which resulted in a 61 year union up until his passing in 2016. She had a passion for the outdoors and enjoyed hiking, cross-country skiing and swimming. Her amazing creativity was demonstrated in painting, pottery and weaving and when it was time to relax, she always had a novel to read and a cup of tea beside her. She also had a love for gardening and animals, especially dogs.

Betty’s family and friends will honour her this summer in Vernon, BC with a gathering and spreading of ashes.

In lieu of flowers, donations may be made to the SPCA (albertaspca.org) or Canadian Red Cross (redcross.ca/donate).