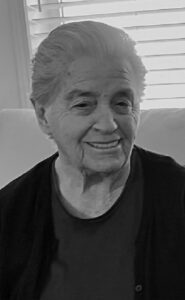 It is with great sadness and heavy hearts that we announce the passing of FILOMENA ANGELINA FICUR on Wednesday, February 24th at the Coaldale Health Centre, at the age of 84.

Angelina was born in Sessano Del Molise, Italy on June 26, 1936. She immigrated to Canada in 1958 and settled down in Readymade, Alberta before moving into Lethbridge. She is predeceased by the love of her life and husband of 55 years, Lino. She is also predeceased by her father, Emilio Iafrancesco, her mother, Carmela Iafrancesco (nee Giacchetta), her brother Palmerino Iafrancesco, her sister Antonietta Kern, brother-in-law Joseph Kern, brother-in-law Riccardo Ficiur, brother-in-law Giuseppe Antonelli, and nephew, Rob Kern. She is survived by her sister, Annina Antonelli, her nieces, Lina, Marilena, Juliana and Dora, and her nephews Dave and Mike, as well as her sister-in-law Iolanda Ficiur and nieces Esperanza and Cinzia in Italy. She is also survived by several other extended family members and many friends she made throughout her life in Italy and here in Canada.

Although Angelina never had children of her own, she loved kids and worked with them in Italy for several years. When she arrived in Canada, she began working as a nanny before getting a job at Catelli’s in Lethbridge where she worked up until her retirement. She married Lino on July 29, 1961, and together they built three houses and remodeled a one-hundred-year-old house. In between the builds and remodels, Angelina would often travel back to Italy with Lino to celebrate and reconnect with family whom she cared so much for, even with the great distance between them.

She will be sadly missed but fondly remembered for her love of gardening, her great fried chicken, and the care and compassion she showed towards everyone. She cared so deeply for all of her family and friends and always cautioned everyone to be careful and call her as soon as they were back at home safe so that she knew they were okay. She was also quick to offer you any kind of snack or drink she could when you visited to make sure you felt welcomed and cared for.

Angelina was laid to rest next to her husband Lino in a private service.

In lieu of flowers, donations can be made to the Alberta Cancer Foundation (www.albertacancer.ca/donate/)