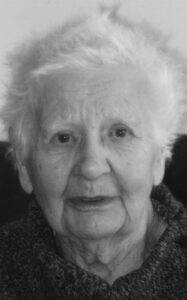 Mrs. Julia (Julie) Anna Godwin passed away a year ago, on March 9, 2020 at the Edith Cavell Care Centre in Lethbridge, Alberta.

Julie was born to the late Marie and Nick Burtney of Vonda, Sask on March 27, 1924, where she grew up on the family farm. She was the 5th of 10 children. Julie moved to Saskatoon to work when she was 20, and married the late Jack Clayton on May 31st, 1951. Together they had 3 children. After Jack retired they moved to Salt Spring Island, B.C., where they lived for 21 years. Julie seemed to have unlimited energy, which earned her the title “the Energizer Bunny” from one friend. While living in B.C. she enjoyed golfing, gardening, weaving, playing bridge and walking on the beach. Julie loved to cook, and enjoyed the availability of fresh salmon and crab. She was also a member of the Catholic Womens’ League for 60 years, from her time in Saskatoon until she died.

In 2000 Julie and Jack moved to Lethbridge to be closer to family. They were members of the Lethbridge Seniors’ Organization and continued to play bridge for a few years and Julie’s love of gardening was still evident with the beautiful flower and vegetable garden she created there.

Julie maintained her energy well into her 90s; she was still shoveling snow two days before she fell ill. On Dec. 26, 2017 Julie became ill and was taken to the hospital, where she stayed for two months before moving to Edith Cavell Care Home, where the staff took excellent care of her.

Julie is survived by her children Ken (Debra), Bob (Kathy) and Kim, as well as grandchildren Ryan (Ashey), Brian (Mai), Jonathan, Lisa (Jayden) and Mike(Brandy), and her great grandchildren Junpei and Noah. Since her death she has had two additional grandchildren, Wakana and Veronica. She is also survived by her sister Elisabeth Burtney of London, ON. Julie was predeceased by her husband in 2013, and her siblings Bill, Helen, Jean, Phyllis, Emily, Pauline and Marcel.

The most important thing in Julie’s life was her children – she could never stop mothering them. They miss her dearly.

Because of COVID no funeral was held. There will be a private ceremony when her children and grandchildren are able to gather.