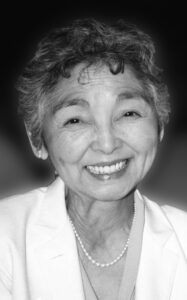 In her 102nd year, Hisako “Esther” Kitaguchi passed away on February 25, 2021, peacefully and with much grace, to be reunited with her beloved family.

Esther was born in Mill Creek B.C. (later called Woodfibre) on October 19th, 1919, to Chiyoye (a nurse) and Tokugoro Sato (a former boatbuilder and head carpenter at the mill). The second of five siblings, Hisako was raised and educated there. An outstanding student, she skipped two grades, finishing high school at fifteen. She aspired to follow in her mother’s footsteps, but was denied entrance to nursing school, her tender age working against her. On July 1, 1939, she married Tadashi Kitaguchi, an Evansburg boy who had moved to the coast a few years earlier. In mid-1942, a few months after the birth of her daughter Keiko, the entire family along with everyone of Japanese descent living on the coast was forcibly moved east of the “hundred-mile line”; Hisako, Tad and their infant daughter ended up in Raymond where they initially lived in a converted granary and laboured in the beet fields, and later, under better circumstances, at Hancock Dairy. When restrictions on movement were somewhat relaxed in 1944, Esther and family moved to Summit Lime Works just west of Crowsnest Lake where Tad had found employment as a heavy equipment operator. There she was joined by her parents and later, her brother. At one time the extended family numbered six, spanning three generations, all housed in a tiny two room log cabin. In 1954, Esther and Tad moved to Lethbridge as part owners and operators of Jack’s Coffee Shop. They settled into a small bungalow, raised their daughter and cared for the extended family, staying until late 2001, when Esther and her brother moved to Calgary to be closer to family. Throughout most of that time Esther was employed at Canada Safeway, ending up as head cashier.

Esther lived a significant part of her life through difficult times, under harsh conditions that few can even imagine today, yet like many of her compatriots, adopted the pervasive “shikata ga nai” philosophy and was buoyed up by an inner strength that carried her forward with optimism. She never dwelt openly on the misfortunes of life, but remembered and was thankful for the good times and kindnesses that were bestowed upon her. She was a loving mother, grandmother and great-grandmother who will be remembered always in our hearts.

Esther is survived by her daughter Keiko Evelyn (Gerry) Raham, two grandchildren, Chris (Laura) Raham of Scotch Plains NJ and Patrick Raham of Victoria BC and two great-grandchildren, Parker (Chris) and Kazuo (Patrick) as well as numerous nieces, nephews and cousins, both here and abroad. She was predeceased by her husband Tad in 1996, her parents Chiyoye and Tokugoro, her siblings Ayako, Toshiko, Fudeko and Tokue.

The family is grateful to those staff at Brentwood Care Centre who cared for Esther from October 2019 and showed her much kindness and attention, in particular Dr. Barbara Smyth, who was especially compassionate.

A private family service will be held at 1:00 pm, on Saturday March 13, 2021. The family invites those who wish to watch the service via livestream at www.mbfunerals.com and scrolling to the bottom of Hisako’s obituary.