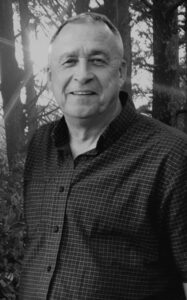 – Master of the Side Hustle,

Jack of All Trades, and

He is survived by his wife Sharon Halter and his children: Ryan Halter (Kayla), Jason Gounden (Kim), Jheri Cook (Ryan) & his favourite fur child Chico. His Grandchildren: Courtney, Creedin, Cohen, Dhillon, Dillon, Harmony, Greysyn and Keira. As well as one Great Grandchild Rohyn. His brothers Leonard Halter (Elsie), Richard Halter and Brent Halter (Ernie). As well as many other family and friends who cared for him deeply.

Larry grew up in Dodsland, Saskatchewan and helped work on the grain farm with his parents and 3 brothers. He built his first car when he pulled one out of his Grandpa’s scrap pile in his early teens and fixed it all up. He drove around town until the police pulled him over and told him to park it until he had his license. This started his love of old cars and mechanics. When Larry turned 16, he hit the road on his own and headed to Edmonton, Ab looking for work, he found it the day he arrived. He spent a couple years there before returning back to Dodsland, Saskatchewan where he met his first wife Leona and they had their son Ryan. Fast forward a few years and some life changes Larry found himself in Calgary, Ab where he met his current wife Sharon at the Town and Country. Larry’s lifelong friend Ron Moser chaperoned their first date (it’s a good story) where Larry promised Sharon she would never be bored, he kept that promise! (Their song was Ghostbusters). A short time later Sharon moved to Kindersley, Saskatchewan with their son Jason. They were married in Taber, Alberta on a short visit to Sharon’s family. Their daughter Jheri was born during the time they lived in Kindersley. Larry, Sharon and all 3 of their children moved to the Okanagan Valley in British Columbia where they resided for about 8 years before moving to Lethbridge, Ab where Sharon, Larry and Jheri settled, while the boys continued on their own journeys living in various places. Throughout his life Larry learnt many skills, such as when he apprenticed to be a mechanic. He became a professional painter as his continuing career, painting everything from houses to heavy equipment. He was in reality a jack of all trades and the neighbourhood handyman, whether it was where he lived or just visiting someone, always willing to help someone that needed something fixed. Larry was always up for a good BS session, had a crazy story to tell, or an inappropriate joke at the ready. He had so many interests and hobbies, he was never done learning. He loved hunting, camping, fishing, taking photos, watching nature, working on old cars (specifically Oldsmobiles), making jewelry from stone and spending time with his kids and Grandchildren. Throughout his life Larry travelled and worked in varying places such as Singapore, Baffin Island and his last big holiday with Sharon to Mexico. The joy of Larry’s life were his kids and Grandchildren. He was always at the ready to give advice, to fix our s#!t, or put something goofy on his head to make his Grandkids giggle. He will always be lovingly remembered. Forever in our hearts and our laughs. You will be missed.

A Celebration of Life will be announced at a later date.

Flowers are gratefully declined. For those who wish, memorial donations may be made to Crohn’s and Colitis foundation of Canada, 600-60 St. Clair Avenue East, Toronto, ON M4T 1N5.