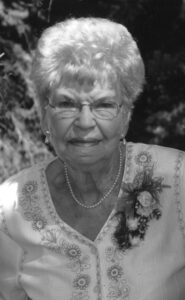 HELEN CHRISTINE MACKENZIE (née Rollag) passed away at St. Therese Villa on Sunday, March 14, 2021 at the age of 99 years.

Helen is lovingly remembered by her daughter Susan (Lon) Redpath and their daughter, Megan (Jay) McMillan; Don’s wife, Judy Mackenzie and their children, Christie (Mike) Archibald and David Mackenzie: and Brian’s daughter, Caroline Mackenzie; eight great-grandchildren, Raygen, Rylee, Nathan, Connor, Lexie and Jesse Archibald and Dane and Chance McMillan; as well as her sister, Josie Williams of Canmore. Throughout her life, Helen maintained extremely close ties with all of her siblings as well as nieces and nephews too numerous to mention.

Helen was the youngest child of John and Amanda Rollag, who homesteaded in Wrentham, Alberta. She spent most of her childhood on the farm before moving to Wynndel, BC with her parents in grade 12. Upon completing high school, Helen returned to Alberta and married Gordon in 1942. They raised their three children on the family farm in Wrentham. Their door was always open and often an extra family member or friend could be found at the breakfast table. In 1974, they retired to Lethbridge and Helen enjoyed much of the next decade spending as much as she earned in retail jewelry sales. She and Gordon were both very involved in all aspects of the Lethbridge Shrine Club and thoroughly enjoyed the altruism and fellowship the organization provided. In 1982, they made their maiden trip to Mesa, Arizona and by 1986, they were spending half of every year there. These were special years. The following years were spent cheering on her family on the horse show circuit and at the Black Powder Gun Club range.

Helen was fun loving and “game” for anything. She was funny, kind and a hard working person who was liked by all who knew her. She was very much a lady, maintained a strong sense of morality and took pride in all that she did.

Special thanks from the family go to Drs. Janzen, Crawford, Smith and Horne as well as the hardworking caring staff of Garden View Lodge, Sunny South Lodge and St. Therese Villa. A special mention to Heather Schindler, Sierra Proudfoot, Dawn Lapointe and Don Gustam for always going above and beyond.

At Helen’s request, no funeral will be held. A private Graveside Service will take place at a later date. Helen will be laid to rest with her son Brian in Mountain View Cemetery in Lethbridge.

In lieu of flowers and in memory of Helen, please consider a donation to the Lethbridge Shrine Club, 315A – 10 Street South, Lethbridge, AB, T1J 2M7.