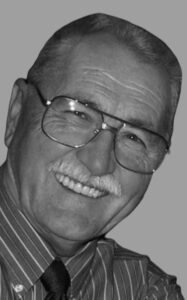 It is with broken hearts and profound sorrow the family announces the unexpected passing of our dear father, grandfather and great-grandpa John Duff at the age of 82 years, on Sunday, March 14, 2021 at Coaldale Health Centre in Coaldale, AB.

John came abruptly into the world alongside the road at Sec.22, Tp26, Rge7, W2nd on June 21, 1938, to Douglas and Grace (Sanders) Duff near Beaverdale, Saskatchewan where the Duffs farmed. Baby John was delivered by his Grandmother (Grammy) Duff in that ditch! Although Grammy never had any formal training, she was known as a midwife by a lot of the local families and also delivered his older brother Peter, his only sibling. John is predeceased by his parents, his brother and most recently his beloved wife Margaret – only 48 short days prior to his own passing.

John joined the Air Cadets in North Vancouver at the age of 14. At the tender age of 18, he received his wings and John earned his pilot’s icence, a proud Air Cadet accomplishment.

John attended North Vancouver High school in Vancouver, BC when he met the love of his life, Margaret Hicks, his high school sweetheart from a rival high school John Oliver. They were married on September 10, 1960 and enjoyed over 60 years of marriage. John and Marg had two children: Keith and Laura.

John was a great businessman and enjoyed a 35-year career in the Insurance business. John co-owned Duff Insurance with his wife Marg in Lethbridge for 15 of those years then enjoyed 26 years of Retirement.

John was a very hard worker who loved keeping busy with projects. He was multi-talented and great with tools. He was our Mr. Fix It and handyman extraordinaire. There didn’t seem to be anything he couldn’t fix. John once apprenticed in an autobody shop and later repaired & painted several family vehicles over the years, including building his own version of a Winnebago which he used to drive the family down to Disneyland and back! Not afraid of a sewing machine, he reupholstered several pieces of furniture over the years. John built additions onto two of their homes; he fixed up and ‘flipped’ a number of revenue homes before finally hanging up his hammer.

John loved hockey and coached a number of teams along the way, ending his coaching days with the Bridge City Barons Jr B team here in Lethbridge at their home rink, Nicholas Sheran. He is affectionately known by his past players as Mr. Duff even though he later gave them permission to call him John.

An avid golfer, he especially enjoyed being a ‘Snowbird’ wintering at their condo on the golf course in Yuma, Arizona. Over the years, John also enjoyed listening to music; especially Roger Whittaker, bird watching, walking and playing card games and socializing with friends.

John will be dearly missed and forever loved by his two children Keith Duff and wife Jeannie of Lethbridge, AB; Laura (Duff) and husband Glenn Hermann of Chestermere, AB. He will be sadly missed by his two grandchildren Lindsey (Duff) and husband Blake Corey; and Carson Duff; his two great-grandchildren Hayden and Jackson Corey; his numerous nephews and their families.

John/Dad/Grandpa/Pop was a gentle hearted, dedicated family man who would never shy of hard work and lending a helping hand. He will be greatly missed by his many life-long friends and all who knew him.

Due to Covid-19, a celebration of John’s life will be held at a future date when we can safely gather.

In lieu of flowers, memorial tributes can be made to the Coaldale Health Centre, 2100 11th St, Coaldale, AB T1M 1L2.

The family wishes to extend a very special thank you to the Physicians and all the staff, especially the nursing staff at the Coaldale Health Centre for all your kindness and compassion during John’s short residency.