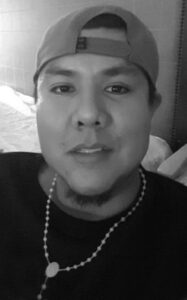 Tommy Luke Eagle Child was born April 14, 1990, in Lethbridge, Alberta. His birth was an unexpected surprised as he was born 7 months premature and was so small that he fit into his dad’s hand. Tommy was a welcomed addition to his family as his siblings were teenagers when Tommy was born. His siblings Andrea and late Justin Eagle Child loved and cherished Tommy immensely. He grew up with his cousin, Matthew Minoose who became his brother since they were babies. They were inseparable and Matt became apart of Cyril & Patty’s family. Patty often would say they were raising twins because they were only 6 months apart. They explored and had many adventures in the coulees around Cyril and Patty’s home. Tommy was close to his cousins Lyndon, Ryan, and Terrance. Frances and the late William Many Bears loved Tommy like a son always caring for him and Huxlie. The Eagle Child, Minoose, and Many Bears families travelled all over Canada & United States and enjoyed their camp trips to Silverwood. Cyril and Patty encouraged him in hockey. Tommy started skating for Kainai when he was 6 years old. In the beginning, Tommy was only going to try out being the goalie for one game. After this game, he became the goalie, and his jersey number was #31. So began Tommy’s love for hockey and his favorite team was a Calgary Flames. Cyril and Patty had many adventures as hockey parents driving, participating in hockey games & tournaments. He travelled all over Canada with many of his teammates who were his brothers celebrating many birthdays with them while at Native Provincials or Treaty 7 Provincials as his birthday fell in April. Cyril and Patty brought Tommy to Okanagan Hockey Camp at Penticton, in British Columbia. A super proud moment was when Tommy played for Canadian Tire Blackhawks in Lethbridge and they were Alberta Provincial Championship Bantam “A” in 2004. The Blackhawks had not won a Provincial Championship in 32 years. It was exciting for the team to be the Champions of Alberta.

Tommy became a young dad to Huxlie when he was 21 and devoted his whole life to his cherished son. He made every moment extra special and happy for his son. Tommy’s world was Huxlie and Huxlie’s world was Tommy. His late brother, Justin was proud to become an uncle and Andrea cherishes being an auntie. He really missed his brother Justin. Recently, Tommy was excited as he was selected to bring Huxlie to Disneyland and invited his little brother Bayley, cousin Chic, Ace & Lucas to go along. Tommy spoiled Huxlie and often bought many toys & everything for each birthday Huxlie celebrated. Another funny moment, Tommy being so tall would ride rides with Huxlie; he barely fit in the kiddie rides but nevertheless rode the kiddies ride with his son. The family just laughs when Huxlie’s favorite team is the Edmonton Oilers because the whole Eagle Child Family are die-hard Calgary Flames fans.

Another proud moment, Tommy graduated high school at Catholic Central High School in 2009. He was the first one to graduate. His classmates asked Tommy who was cheering him on as he crossed the stage as he had the loudest cheer amongst a 1000 people. Tommy started school at Standoff Elementary, Cardston Elementary, Junior High and High School and a short time at Kainai High School. In 2011, Tommy was in a work experience program and was going to school to upgrade. He started working nights at Wal Mart in Lethbridge. Recently, he was going to apply for a Security Program in Lethbridge. The team lead said he wanted Tommy to be on his security team upon picking up the application to attended school and meeting Tommy.

Tommy had a quiet presence about him, he cared deeply for his family & friends and was the most-friendliest guy around. His first cousins were his brothers and sisters. He had many, many friends and family from hockey who became his hockey family. Tommy never complained about being a stay-at-home parent as long as Huxlie continues to smile; he tended to Huxlie every need both at home and in hospital. There were many long hospitals stays but he always remained optimistic. Tommy always wore his rosaries wherever he went as he often visited his friends unexpectedly. He loved to cook and would often do all the cooking spoiling Patty so she would not have to cook. Tommy liked to write his thoughts down and helped his dad outside the house. We will miss our gentle, friendly, kind-hearted, Tommy as he soars now with the Eagles’ above.

To send a condolence or Watch the Funeral please visit www.legacyfuneralhome.ca