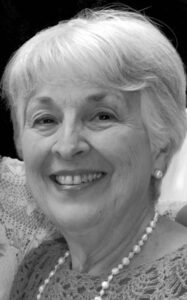 Dorothy Marlene was born to Luke Raisbeck and Urilla Torrie on 2 August 1941 at Lethbridge, Alberta, Canada. She was their only child and called their rustic sheep ranch at Grassy Lake, Alberta, her home for the next twenty years.

Marlene, as she was always known, had a happy childhood on the ranch near lots of Raisbeck and Torrie cousins. She attended the public schools in that Chamberlain district and was always an honor student.

The family raised sheep by the hundreds and basically made their living in that economy. Marlene was certainly a part of that and helped nurse the bummer lambs. One of her favorite stories was that one year, along with the bummers, she raised an orphaned baby antelope, which she named Flag! Marlene loved and enjoyed animals all her life, and enjoyed the deer, raccoons, turkeys, dogs, and cats at her Eugene home. Marlene finished high school in Taber in 1959 and began her college career at Lethbridge Community College and the University of Lethbridge, finishing her Bachelor’s degree at the University of Alberta in Edmonton in 1964.

She began her teaching career in Lethbridge, then Calgary. The Calgary Board of Education awarded her a grant to earn a Master’s degree in a special phase of counseling to be earned at the University of Oregon if she would return to Calgary for at least three years to further their efforts to help parents of children with certain learning difficulties.

While Marlene was studying in Eugene, she met Del Matheson. They dated, visited each other’s families in Iowa and Canada from 1967 to 1970, and felt they knew one another well enough to become engaged on the first Earth Day in 1970. Marlene was still a counselor in Calgary and Del was a librarian at Lane Community College, but they were finally married at Lethbridge, Alberta on 8 Aug 1970 with 20 of Del’s family from Iowa and about 250 of Marlene’s family and friends! After moving to Eugene Marlene continued to counsel at a Eugene junior high school.

When their son Ryan was born in 1974 that ended her working for the schools. Marlene treasured being mother to Ryan above all else.

Del and Marlene “unwisely” bought a printing business when Ryan was in kindergarten and kept it afloat until 2001, when they sold it and began a life of retirement. They lived in the same home until Marlene’s death on 14 March 2021 from complications of Covid 19.

Marlene was a devoted lifetime member of The Church of Jesus Christ of Latter-day Saints and willingly served in various leadership, teaching, and service capacities. She loved her Church affiliations and never did anything grudgingly. In her spare time she enjoyed studying, family history, and writing, especially family biographies. Another impressive activity and talent was needlework in many forms. She loved to sew family clothing, and a gift of one of her quilts was a treasure indeed. Marlene enjoyed board games and card games such as Canasta, and she was hard to beat! And, Marlene loved to laugh; she was a happy woman.

Marlene is survived by her husband Del, their son Ryan, his wife Ursula, extended family, and an even larger family of friends. A gathering celebrating her life will occur at a future time.