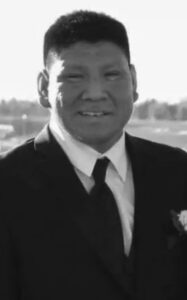 It is with great sadness that the family announces the sudden passing of our beloved son, dad, spouse, brother, uncle, nephew, team-mate, Matthew, at his residence on the Blood Reserve, Alberta on Saturday March 20, 2021.

Matthew was born to his loving and proud parents, Martin Jr and Crystal Curly Rider, at the Cardston Hospital. He was raised with strong Christian Morals, as a baby he was dedicated back to God in the Christian Faith. Matthew was given the name ‘Kootonaikowan’, by his grandfather Jack Curly Rider Sr, after travelling with his parents at 2 months old to a camp meeting in BC. Matthew believed in our Lord and Saviour Jesus Christ. He would be seen reading his Bible, filling his spirit with the Word of God.

Martin and Crystal always encouraged Matt to call upon Jesus in times of need as Matt was proud of his upbringing in the Lord. On the night of his passing at Martin and Crystals residence, along with other family members, began praying for our dear Matthew curly rider. Matt whispered in her ear “mom” one last time and then that sweet smelling saviour of the holy ghost filled the room, Crystal knew in that moment that Matthew was being carried away by our Heavenly angels and the Holy Spirit to Heaven. With our faith in Lord Jesus Christ, Matthew is home and at peace in Heaven.

Matthew was a natural born athlete. He would excel in any sport he joined throughout his life which brought him many championships along his journey. As a small child he started his athletic journey with T-ball, coach pitch, slow pitch, fast ball, cross country running, badminton, and volleyball, rodeo club in high school, roller hockey, ice hockey from pre-novice to midgets. In 2002 he represented Team Alberta at the North American Indigenous Games in Winnipeg, Manitoba. While there, Barry and Matt, also known as the twins, won a Silver Medal in the Badminton Pairs Division. In 2005 Matt won a Championship Banner with the Didsbury Midget Hockey Team. Matthew was a dominant and phenomenal enforcer on the ice where his secret skills were well displayed, his coaches were often amazed by his hockey sense. Matthew also loved playing baseball. He started out playing T-ball in Lethbridge and when they moved back home, he played fastball with the following teams: The Gunns, from 2001-2008 and then from 2008 to present he played with The Tribe. Also, slo-pitch with the Sluggers. Matthew played in many tournaments, his favorite being the Canadian Native Fastball Championships playing with the Canadians. One of the Highlights of playing in Canadians, was hitting a Home run in Prince George, BC. He also played in the CISA League in Calgary for 10 years. He started out as a short stop but could play any position he was assigned, but he excelled as a short-stop. Matt also tried his hand at Volleyball, playing with the Cricketz. Matt made many friends on and off the field. He was a very respected individual who would give the shirt off his back. He was a very quiet but friendly person. Always had a smile on his face and would make sure to greet you with a head nod.

Along with the many accomplishments in sports, his passion for Education. He began his Kindergarten years in Lethbridge, before making his way back home to Kainai. From grade 1 to grade 6, he attended Lavern Middle school and continuing with school at Kainai High School. Matthew was proud to have graduated High School and obtained his High school Diploma in 2008. This started that seed of knowledge and he enrolled in the Automotive program at Lethbridge College, earning himself a certificate. In 2018, Matt enrolled in the Educational Assistant Program at Red Crow College with a collaboration with Bow Valley College and graduated in June of 2019. He was then employed with Kainai Board of Education, working as an Educational Assistant, making a full circle of returning to KBE.

Matthew was the proud father of his three beautiful children: Taleaya, Paisly and Kylen. Matthew went above and beyond to make sure his children’s needs were met. He was a very hands-on dad, and his children were the epitome of his life. We are happy that Matt left us a piece of himself here on Earth, as we see the many resemblances his children display.

Isaiah 40:31-But they that wait upon the Lord shall renew their strength; they shall mount up with wings as eagles; they shall run, and not be weary; and they shall walk, and not faint.

To send a condolence or Watch the Funeral please visit www.legacyfuneralhome.ca.