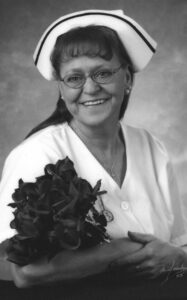 We are heartbroken to announce that Jeanette Wachtler, of Lethbridge, cherished Mother of Colleen Gatzky, was taken home by her Heavenly Father on April 1, 2021 at the age of 69, just in time to be there for Easter.

Jeanette was born Nov 5, 1951 to parents Myrtle and Edmund Wachtler. She spent her early years in Milk River; her family moved to Calgary in 1965 where she lived until she moved to Lethbridge in 1978 with her daughter.

Jeanette worked for AGT during her time in Calgary and had several jobs in Lethbridge including working as a waitress at the El Rancho Hotel, and as a clerk typist for Alberta Fish and Wildlife and later for Alberta Education. However, she found her true calling when she attended nursing school at Alberta Vocational College in Calgary and graduated in 1995 as an LPN. She worked as an LPN in Lethbridge and surrounding areas while continuing her nursing education at the University of Lethbridge. She graduated with her Bachelor of Nursing in 2005. Jeanette particularly enjoyed her work at the hospital on 3A with the babies and new moms.

Jeanette yearned to find a way to combine her strong Christian Faith and her desire to serve and take care of those in need. This led her to her medical missions with Joyce Meyer Ministries Hand of Hope in 2011. She served on over 50 missions in 40 countries and continents and she loved every moment of it…especially those babies! She would come home with her iPad full of photos and anyone who knew her would have to plant themselves down to share her experience!

When she found time between her work and her missions, Jeanette could be found riding her motorcycle, enjoying pizza with her friends and fellowshipping at Lethbridge Christian Tabernacle.

Jeanette is survived by her only Daughter, Colleen Gatzky (Rich), her brother Phil (Donna) and Sister in Law Cindy, and nieces and nephews James, Douglas, Edmund, Vicki and her son Bradon, Derek (Tresley) and their children Jovie, Jaxon and Neve, Tammie and her son Maddox, Nicole and Courtney. She is also survived by her first husband Ian Stirling and second husband Louie Lippa.

Jeanette was predeceased by her parents Myrtle and Edmund, her brothers Gregory and Tom, her sister Theresa and her brother in law Ephram.

Due to Covid restrictions, a private family service will be held Thursday, April 8, 2021 at 2:00pm with Pastor Frank Allen of Lethbridge Christian Tabernacle officiating. The family invites those who wish to watch the service via livestream at www.mbfunerals.com and scrolling to the bottom of Jeanette’s obituary.