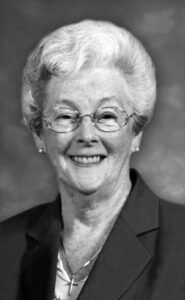 CATHERINE “CATHIE” McGINTY, beloved wife of the late James “Jim” McGinty, of Lethbridge, passed away peacefully at the Edith Cavell Care Centre, on Saturday, April 3, 2021 at the age of 86 years.

Cathie is lovingly remembered by her sisters Sadie McCarthy and Phyllis Alexander as well as her niece Katrina Whittingham in Scotland and numerous nieces, nephews and extended family in Canada, Scotland, England, Australia and Spain.

Along with her husband Jim, she was predeceased by her parents, George and Bridget Tracey and sisters, Margaret Tracey and Georgina “Ina” McIntyre.

Cathie was born in Glasgow, Scotland in 1934, the 4th daughter to Bridget and George and younger sister to Sadie and Ina. 19 months after Cathie, the family became complete with another girl, Phyllis. Unfortunately in 1927, her parents had already suffered the loss of their 5 year old daughter, Margaret. Further tragedy struck the family in 1942 with the sudden death of Cathie’s father, George.

Life was challenging for the Tracey family, but they all pulled together and worked hard, to allow Cathie and Phyllis to finish school and gain employment. Life began to change for Cathie in 1952 when she met her one true love, James McGinty. Their courtship was cemented in marriage on 15th February 1954 and they began their married life in the small family flat in the east end of Glasgow, close to both their families. Cathie and Jim progressed in their jobs in Glasgow and enjoyed an active social life with friends/family.

In 1964 they made the decision for a better future and followed Cathie’s sisters, Phyllis and Sadie to Canada. All three sisters began to settle into Lethbridge life. In her first week, Cathie found a job in The Municipal Hospital as a medical secretary with the support of post school qualifications and excellent references from her Scottish employers.

Despite finding employment easy, Cathie found it hard to settle in what was rural Lethbridge of 1964, having moved from the bustling city of Glasgow. Cathie was often homesick for Scotland, but ultimately Jim convinced Cathie, Canadian life was for better for them. Her mother, sister, Ina and her extended family also made frequent trips to visit their ‘Canadian‘ family. The last visit ‘Gran Tracey’ made was in 1983 at 87 years old! So, distance did not stop the family from remaining close in their hearts.

Cathie had a successful career in secretarial and administration work in the Agriculture Research Station in Lethbridge. She was a respected colleague, member of her local church and friend to many. Cathie enjoyed hobbies such as square dancing, crafting, fishing, travel, baking, entertaining and loved shopping with a passion! She tolerated Jim’s love of hockey!

After retirement, Cathie initially became an active church volunteer, however in time, she endured several health concerns which curtailed her ability to volunteer or remain active in her local community. More recent debilitating health concerns led to the difficult decision for her husband Jim to seek the assistance of Edith Cavell Care Centre in the provision of her care. Up until his death in May 2020, he remained absolutely devoted to Cathie, visiting three times a day, every day. They both grew to trust in the care provided by Edith Cavell’s staff, who remained compassionate and dedicated until the end of Cathie’s life.

Cathie led a full beautiful life, overcoming early tragedies and challenges. She was a dignified lady with a formidable presence. Her personal area of life fulfilment appeared to be in her 66 year marriage to Jim and even though death separated them last year, Cathie’s Eastertide death will have brought them back together, God willing.

A Prayer Service will be held on Friday, April 9, 2021 at 7:00 P.M. with Francis and Cybele Noronha officiating.

A Funeral Mass will be celebrated on Saturday, April 10, 2021 at 1:00 P.M. with Father Kevin Tumback celebrating. Both services will be live streamed and may be accessed via Cathie’s obituary on the Cornerstone website.