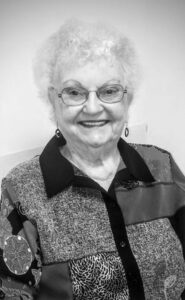 It is with deep sorrow and much love that we mourn the passing of our beloved mother and grandmother, MILDRED “MILLIE” KATHLEEN SHANKS. On Monday, March 29, 2021 after a brief decline in overall health, Millie passed away peacefully at home with her family by her side at the age of 92 years.

She was predeceased by her loving husband of 63 years Lawrence and her four older sisters and three brothers: John, Bessie, Marion, Eleanor, Dorothy, Gordon and brother Alvin. Millie was the last living member of our family from the homesteads of the past. No more questions to be asked, no more answers to come from living history, a void forever more.

Millie was born on June 13th, 1928, in Willow Bunch Saskatchewan, the youngest of eight children. She lived during a time where there wasn’t much to be had, never even having had a store bought toy doll as a child. They always made the best of things and with a strong family, they were always taken care of. Millie attended school in Willow Bunch, taking a “gig”, a type of two wheeled cart pulled by horse. Being the smallest, she was the passenger with Alvin often the driver. In her high school years, she worked at a local restaurant after school and received room and board. She only completed grade 11 due to the fact that she went to a dance in Verwood, Sask., where she met the love of her life, Lawrence and moved from school girl to wife. They were married in 1947 and lived in a small one room homestead to start their lives together. Strong, loyal and true to her word, she remained by Lawrence’s side through later years while he was in Edith Cavell Nursing Home, attending daily for years, being an active caregiver and wife in order to make sure he was comfortable and well cared for. Times were tough at the start of their lives. Mildred carried all the money they had in her purse for a number of years. While on the farm, she worked tirelessly, helping with chores of feeding cattle as any hired hand might. That was added to helping with other farm work, looking after a two acre garden, a flower garden and cleaning up the yard of old buildings and materials. She began her own family, with Glenn in 1951, Lana in 1954 and Lyle in 1959. Family was the most important thing to Mildred and she supported, cared for and loved them unconditionally for the entirety of her life. She loved her four grandkids attending any and all events that she possibly could. There was always something to brag about, when you have grand ones and ..she did. She was independent and an athlete, finding time to curl with Lawrence and on her own teams while on the farm. Later in life, Millie enjoyed bowling, bridge, crib, coloring, puzzles, crosswords and the list would go on. An avid Blue Jays fan, hockey fan and general sports fan, Millie had a love of life and for the people around her. She moved on with life in each stage from house, to condo and finally assisted living in the Garden View Lodge, always seeming to know when the time was right. She was an example of life progression and acceptance of what was to come.

A twinkle in her eye, a smile, a sparkling spirit. We must say good-bye for now, though you will kept close in our hearts for all of our time.

Sweet Dreams to our mom, grandmother and friend.

The family would like to express its deepest thanks to those who have supported Millie throughout her time. Adrian and the staff at Garden View Lodge were wonderful, the caring, the atmosphere, the personal touch on everything, “Thank you”. The home care team and Palliative team were so supportive in our times of need, “Thank you.” Emergency staff, hospital staff, doctors, all with such care and concern, “Thanks”….and all the missed thanks you’s. The Shanks

A Celebration of Life will be held on Tuesday, April 13, 2021 at 1:00 P.M. The service will be live streamed and may be accessed via Mildred’s obituary on the Cornerstone website.