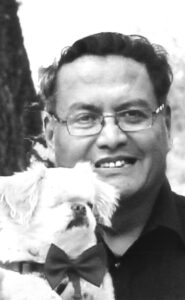 CLARENCE ARTHUR CHIEF BODY (IIKINAWAHKA), beloved husband of Denise Shade, and son of Arthur Sweet Grass and the late Ada Chief Body, was called home by the creator on Thursday, April 8, 2021 at the age of 55 years.

Clarence was a kind man, too kind for this world. He had the ability to make everyone feel special. You would often find Clarence striking up a conversation, telling stories or joking with everyone. Clarence had a special ability to connect with children; his magnetic personality drew everyone in. He had a natural gift to encourage people to reach their full potential. Clarence held a special place in his heart for his nieces and nephews and he would, with immense love, do anything for them. His nieces and nephews were his pride and joy, and he would always fuss over their wellbeing, and would if he could, give them the world.

Clarence devoted his life to his beliefs in spirituality and lived a selfless way of life. Clarence drew a great deal of strength and wisdom from his uncle Clifford. He made annual trips to Wisconsin to help his uncle with his ceremonies. Clarence found comfort through spirituality and helping when he could at ceremonies, especially at the Aako’katsin and through this, he lived a full life.

Clarence’s love for powwows started when his mother Ada bought him his first set of bustles. Clarence’s desire for dancing allowed him to form a dance troop for youth and perform at numerous schools. Clarence later dreamed of being able to recreate “The Battle of Belly River” in an artistic choreographed version of the fancy feather dance. Clarence and Geoff were championship fancy dancers, inseparable partners, they had many friends and many stories on the powwow trail in Canada and the USA.

Clarence’s mom Ada began a family craft business, which he continued on in her memory. Together they made Indian dolls, and cut willows to make small tipis. Clarence was a perfectionist and took great pride in his work. He was a visionary; a Master Fancy Dance Bustle maker. Clarence was always improving and perfecting his bustles, looking to engineer lighter, faster and fuller fancy dance bustles, each one better than the last. His exceptional bustle making style can be seen as worn by many championship fancy dancers across powwow country.

Clarence became an artist at a young age. His passion for art lead him to win numerous art contests. Clarence then started to draw murals and can be seen at Head Smashed-in-Buffalo Jump, Lucky’s Bingo, Aahsaopi Elementary School and other numerous locations. Clarence loved playing sports such as basketball and hockey. He also loved fishing, jogging, hiking and most recently, camping.

Clarence met the love of his life, Denise, in 1998, and together for 23 years, they built a beautiful life. Clarence was particularly proud of the hard work and dedication Denise showed in everything she did. Together, they created countless memories for their children, grandchildren and family; particularly traveling to powwows, cheering them on at hockey games, basketball games and camping.

Clarence’s life was renewed when they adopted Gary in 2004, The companionship and loyalty that Clarence and Gary developed was unbreakable. Gary and Clarence took care of each other and were never seen apart. Gary will always be missing and looking for Clarence.

The family sincerely apologizes for any names that might have been missed. Clarence was close to many relatives and friends.

The family would like to extend a sincere thank you to the ICU Doctors, Nurses and Staff at Chinook Regional Hospital for the exceptional care and support they provided to Clarence.

Clarence will be laid to rest in St. Catherine’s Cemetery.