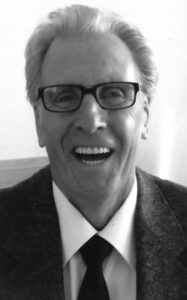 Daniel Walter Perry of Lethbridge, beloved husband of the late Shirley Florence Perry passed away peacefully after a lengthy illness on the morning of April 18, 2021 at the age of 87 years.

Daniel grew up in Nottingham, England, the son of a third- generation coal miner. After completing his schooling, he also started a career in mining. Dan was always very athletic and involved in many sports in his younger years not only the traditional ones like football and cricket, but he was also always an avid player and fan of tennis, ice hockey and baseball.

A chance meeting set up by the Captain of the Ice Hockey team lead him to Shirley Florence Day the love of his life. After their marriage, the happy couple settled into Nottingham where they started a family. Son’s Wayne Daniel and Dale Martin were both born in Nottingham where they lived until the kids started school.

Dan was always interested in Canada and when he had the opportunity to immigrate, the family went along for the adventure. Settling first in Grande Cache, Alberta where their sons finished high school and married.

Later Dan and Shirley who always enjoyed warm weather, gardening and outdoor activities moved to Lethbridge where they retired and stayed for their later years with many friends.

Throughout his days he has had a strong belief in giving back to the community, he did this by volunteering at the local hospitals, with minor-sports, working with the handicapped, and helping wherever he could. He was always willing to help!

Dan continued to always be incredibly involved in sports both playing and watching. One of his crowning sporting achievement was representing Alberta in tennis in the Canada Senior games, he was also an avid fan of the Oilers and Blue Jays.

A private family Funeral Service will be held at 2:00 PM, on Friday, April 23, 2021. The family invites those who wish to watch the service via livestream at www.mbfunerals.com and scrolling to the bottom of Daniel’s obituary. Burial will follow in the Royal View Cemetery.

Flowers are gratefully declined. Those who wish, memorial donations may be made to the Lethbridge Regional Hospital or the Canadian Cancer Society.