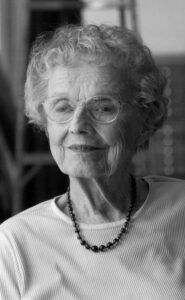 MARY FRANCES LEISTER (Rohovie) passed away peacefully on April 22, 2021 at the age of 96. She is survived by her daughters Patricia (Norbert) Boehm and Betty (Ian Brock) Leister as well as grandchildren Nigel (Ronelle) Boehm, Eve (Jeremy) Hendricks and Christian (Jessica) Schacher as well as great- grandchildren Piper Hendricks, Theodore and Frederica Boehm. She is also survived by sister Helen (Al) Ferenz, Sylvia (John) Marshall, brother Dan Rohovie and sister- in- law Margaret Rohovie as well as many loved nieces and nephews.

She was predeceased by her beloved husband Frederick Albert (Fred) Leister and her much loved daughter Loretta (Lori) Leister.

Mary was born in Coalhurst September 18, 1924 to parents Lilian and Nickolai Rohovie, immigrants from Romania. Mary completed her education in Coalhurst and Lethbridge, later attending Alberta College specializing in accounting and shorthand. She had many jobs including working at a grocery store, an insurance office, and 10 years as a paralegal at a law firm. She was said to be extremely proficient in her shorthand and book-keeping abilities. In her spare time, she worked as a volunteer for many organizations such as the Catholic Women’s League, the Soup Kitchen, the Cancer Clinic, elementary schools, the Lethbridge Symphony Association and the hospital auxiliary. She was also a breast cancer survivor herself.

Married in 1945, Fred and Mary bought Brown’s Music Store in 1953, later renaming it Leister’s Music. Leisters was a well- known local Lethbridge business for many decades. Mary would always be seen book- keeping at the store and fishing through records or sheet music – a whirlwind of efficiency! Mary and Fred also owned a hobby farm, which Mary loved and where she planted flowers, vegetables and occasionally kept cows and chickens. Her beautiful gardens were featured in the Lethbridge Herald.

When Fred passed away in 2000, Mary eventually moved into her condo at Martha’s House where she lived independently until 2020. She had many wonderful memories of Martha’s House and was so appreciative of the staff and residents who made it a wonderful place to live. Due to her higher care needs, Mary moved to West Highland’s Care facility in September 2020 during the first wave of the Covid Pandemic. Given restrictions, her ability to maintain connections and visitation with loved family and friends was limited. This was difficult for her family and Mary especially.

Mary and her family would like to thank the residents and staff at Martha’s House as well as the West Highlands Care facility, her doctor of many years Clair Forestell, and the Chinook Regional Hospital staff, especially Dr. Plotnyk.

A Funeral Mass will be celebrated on Thursday, April 29, 2021 at 10:00 A.M. with Father Derek Remus celebrating. The Mass will be live streamed and may be accessed via Mary’s obituary on the Cornerstone website.

In lieu of flowers, donations may be made to the Canadian Heart and Stroke Foundation or the Canadian Cancer Society.