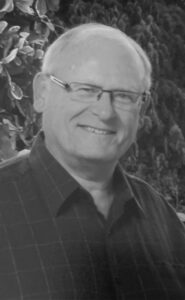 DEAN FREDERICK McFADDEN, beloved husband of Cindy McFadden, of Lethbridge, passed away peacefully at home, on Wednesday, April 21, 2021 at the age of 76 years.

He just celebrated his 52nd wedding anniversary and his wife Cindy was the love of his life. He is the loving father of Deana Montgomery (Cory) of Portland, Oregon and Darren McFadden (Kyla) of Lethbridge; and loving grandfather to Layne and Fisher Montgomery and Cason and Landon McFadden.

Dean was born and raised in Lethbridge and lived his entire life in Lethbridge. Dean was a partner in the family businesses with his brother Barry (Barb) McFadden: Bert and Macs (which his father Mac started), Lethbridge Honda Centre and McFadden Honda, businesses his son Darren and nephew Jon now operate. Dean spent most of his career managing and operating Lethbridge Honda Center from 1965 until his retirement, a business that grew out his life-long love of motorcycles. He was an early member of the Lethbridge Trailblazers Motorcycle Club (now the Lethbridge Motorcycle Club) which promoted many dirt-events including motocross’ and hill climbs. He was an avid rider himself, competing in both cross-country and hill-climbing and winning many championships along the way, and as time went on, enjoyed weekend rides over the Logan’s Pass with his wife, and friends. He enjoyed attending car shows throughout southern Alberta with his Camaro and Corvette and spent many hours tinkering on cars and vintage Honda bikes in his man cave with his good friend Mark. Dean worked hard his whole life and enjoyed his retirement traveling in his Motorhome with his wife and by spending winters at his place in Arizona. He enjoyed attending Lethbridge Hurricanes games and cheered on the Edmonton Oilers an interest he shared with his Son and Grandson. More than anything, he loved his family, whether it was sharing his passion for motorcycles, cars and sports with his grandsons or cheering for his granddaughter on the soccer field.

A private Family Graveside Service will be held at Mountain View Cemetery.

One Condolence for “McFADDEN, Dean”