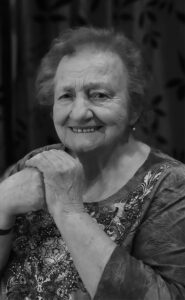 HELEN MARIE SCHAMBER (nee Orosz) passed away peacefully April 21, 2021 at the age of 89, three weeks shy of her 90th birthday in Lethbridge, AB.

She was predeceased by her husband Peter Jack Schamber. Helen will be remembered by her remaining sisters Beth McKinley and Emma (Melford) Friedrick as well as sisters-in-law.

Helen grew up in the Hungarian area of 1-17 south of Milk River. She grew up in the old days where she lived on a farm, did a lot of chores, and rode her horse to school. Growing up in the hard times of the ‘30s etched many thrifty means of living into her lifestyle.

Peter built a new house in Milk River for Helen and his family. It was here that Christopher was welcomed into the family. Helen lavished love and support on her red-headed children. She was a great cook and a wonderful baker. She loved gardening and was known for her bountiful flowers which she often donated to community weddings. There is a plethora of ribbons from the flowers she collected from her entries into the local Bonzana Day celebrations.

Helen faithfully looked after Peter into his latter years when macular degeneration took away his sight. She delighted in her grandchildren and treasured her great-granddaughters.

Helen did not choose to suffer under the shroud of mental illness, but worked to overcome this disability through generosity.

A private Prayer Service will be held on Wednesday, April 28, 2021 at 6:00 P.M. with Father Salvador Ahumada officiating.

Helen will be laid to rest with her husband Peter in Milk River Cemetery.

In memory of Helen, donations may be made to Spinal Cord Injury Alberta (sci-ab.ca/donate/).