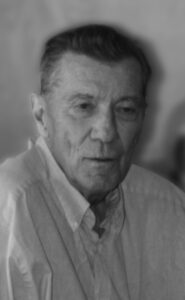 It is with great sorrow that the family of LESLIE ROY VORNBROCK announce his passing on Wednesday, April 21, 2021.

Leslie is survived by his wife Marion, three sons, three daughters-in-law, five grandchildren and one great-grandson.

He is predeceased by his sons Leslie Jr. and Keith and brother Harold Vornbrock.

As a journeyman carpenter, Les created a legacy of structures all over the local county. LR Vornbrock and Sons was your assurance the project would be perfect.

Les was also a major volunteer of his time to his community of Milk River. He served on the town council from 1980 – 1986. His coaching and refereeing included hockey, basketball and softball teams of all ages.

He was a driving force in the county music program, even though his contributions were more volunteering than his vocals.

He worked diligently as a fundraiser for the Knights of Columbus. He was very proud to be a part of this organization and eventually became a Fourth Degree Knight.

As the oldest son, he was a legend to me and always will be.

His spirit will be greatly missed.