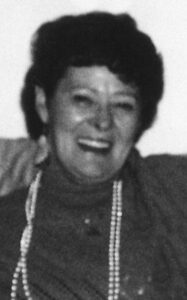 Mrs. Barbara Howe (nee Dalton) of Lethbridge, beloved wife of the late Patrick Olaf Howe, passed away on Wednesday, April 21, 2021 at the age of 90.

Born May 13, 1930 at the Lethbridge Galt Hospital, Barbara was the 4th of 5 daughters (the infamous “Dalton girls”) born to John Robert Dalton and Florence Finningley Dalton (nee Cliffe). The family lived on a farm at Barhill and later moved to Lethbridge where Barb finished high school at LCI and then trained at the Galt School of Nursing, achieving her R.N. designation in 1951. She worked briefly at St. Michael’s and Lethbridge Municipal Hospitals before marrying Pat on March 29, 1952. She worked many years at the Campbell Clinic for Dr. Gore-Hickman and Dr. Stillwell, then worked as in-house nurse at Sears, and later became Chairman of the Board for Schwartz-Reliance Insurance where she kept the whip cracking on her boys, Dalton and David.

Barb was athletic and despite advancing arthritis, curled many winters and golfed every summer. As a member of the Henderson Lake Golf Club for over 50 years, Barb donated her time, expertise, and good cheer as an HLGC board member, organizer, and participant in many tournaments. In retirement, every summer weekday you could hear the laughter of Barb, Elsie, Joan, and many of her other golfing girlfriends echoing over the Henderson Lake waters as they made their way down the fairways.

Barb enjoyed bridge, crib, hearts, and tiles and had infinite patience teaching the games to her children and grandchildren. Being curious about the world she travelled with Pat as often as possible. After Pat passed on November 16, 1999, Barb continued travel explorations with her life-long friend and fellow Galt grad, Dodie Droine.

Given her quick wit and infectious sense of humour, Barb’s friends and family loved sharing time in laughter with her on the acreage where she and Pat had lived since 1971. She had a warm, generous heart, and her door was always open. Honesty and integrity were hallmarks of Barb’s character, making her a loyal and true friend. She was fiercely independent, rarely asking for help herself but always lending a hand to help others wherever, whenever, and in whatever capacity was needed. She had a spine of steel, a resilient spirit, and a strong work ethic. In a hundred small and large ways, Barb supported her children in all endeavours they undertook. Friends and family were the lucky beneficiaries of her unmatched joy for life and infinite capacity to love.

Thanks to all extended family and friends who reached out to share stories of Barb’s generosity and humour. Heartfelt thanks to Christina Roberts (AHS), Veranan Enns, Dorcas Maristaza, Tianna Husarewych (Bridge Home Care), and all of the caregivers, nurses, and physicians whose compassionate care of Barb gave her a gift beyond measure – the ability to live close to her children in her own home of 50 years until just a few days before her passing. We will all miss her.

A celebration of her life will be held at a later date.