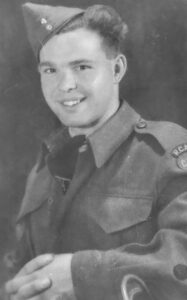 Ralph Rulon Richardson was joyfully re-united with the love of his life, Ethel Marcia Richardson, on April 25, 2021. He was also greeted by his three children who predeceased him: Gerald, Diana and Kim.

Ralph was also predeceased by six brothers and some of their wives, Richard, Ernie, Clarence & Marge, Calvin & Peg, Melvin and Gary & Jean; his sister May and her husband GR Clifton, and his sister-in-law Marie Richardson. A son-in-law Arnold Braconnier as well as a grandson Jothan Braconnier, granddaughter Kimberly and a grandson William.

Left to cherish the memories of Ralph are his brother, Carl Richardson, his children Gonny (Ger), Donna Braconnier, Mary Ellen Toker (Ron), Lyla Armas (Sam), Richard, Lisa Canada (Andy) and Carolyn whom he raised as his own. Ralph also has 21 grandchildren and 29 great grandchildren.

Ralph served his country during World War II along with three of his brothers. (All came home) He taught by example; caring for others, hard work, love of life and importance of family (even if you weren’t his own). All who knew Ralph would recognize the twinkle in his eye when mischief was afoot.

Ralph will be greatly missed by all who knew and loved him.

Words cannot express the appreciation our family have for the staff at Prairie Ridge Good Samaritans in Raymond for the loving care and respect that was demonstrated in their interactions with our father.

The family requests in lieu of flowers, donations may be made in the memory of Ralph Richardson to Good Samaritans Society Prairie Ridge. They can be contacted at 1-403-752-3441.