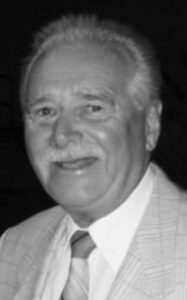 It is with deep sorrow that we announce the passing of our beloved husband, father and Opa, Johannes “John” Husch at the age of 86 years. John was surrounded by his family at the time of his passing.

John was born on February 13, 1935 in Neuenkirchen, Germany. John along with his parents and siblings immigrated to Canada in 1953 settling in Southern Alberta. He met his first wife Antonia “Toni” Van den Hengel and they shared 34 years together until her passing in 1991.

After moving to Canada, John was involved in the German Canadian Club from its inception, where he met many of his lifelong friends. During this time, he was also involved in soccer with the Bombers and Golden West Bombers both as a player and a coach, winning the Provincial championship in 1958. John continued to coach soccer for many years for both youth and adult teams. In 1970-71 the German Canadian Male Choir was formed and continued for over 30 years, traveling throughout Western Canada, performing and competing with great success. For many years throughout his life, the dancing, dinners and celebrations at the German Club were very much a major part of John’s life. Singing at home or with the choir always brought joy for him and his listeners. Family and friends were precious to John. The friends he made when he first came to Canada were lifelong. This group of friends stayed together in all the changes throughout the years. The German Canadian Club was the base as they went from soccer, to performing in the choir, to golf.

After the passing of John’s wife Toni, he made many trips back to Germany, and that is where he met his wife Lissy. They were married in Germany in 1997 and just celebrated their 24th anniversary. John and Lissy had a very active social life together. For many years they wintered in California, early spring was spent in Germany and John was always back home in the spring for the start of the golf season.

Their love of the outdoors had them traveling in their motorhome venturing out to the new golf courses wherever they went.

He was predeceased by his wife Antonia “Toni” Husch; parents Peter and Freida Husch; brother and sister-in-law Richard and Wilma Husch; son in law Pat Maclean.

John lived his life to the fullest enjoying everyday. He worked hard, danced harder, sang like an angel, golfed like a pro and loved with his whole heart.

A private family Interment will be held at Mountain View Cemetery. As per John’s wishes, a celebration of his life will take place “when Covid is over”.