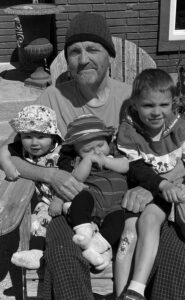 It is with profound grief and deep sadness that the family of Jeffrey Stuart Gibb announces his sudden passing on May 8, 2021 at the age of 55 years.

Jeff is survived by the love of his life Karen and their three children Zachary, Brooklynn (Charlie Knight) and Sydney (Erik Goulet) Jeff will be sorely missed by his three grandboys and best friends, Max and Harrison Knight and Jack Goulet, as well as his brothers and their families Mike, Dennis, Rod (deceased) Kevin, Tim and Brian along with his mother in-law Irene Blumel and his furry companion Maibee.

Jeff was born in Picture Butte Alberta on August 22, 1965 to Alice and Wayne Gibb. Jeff grew up there until his teenage years, when he and his family moved to Magrath where he met Karen for the first time and their love story began. Jeff and Karen were married on September 10, 1988 in Lethbridge and within a few years they were given the gift of parenthood with the births of Zach, Bee and Syd. His family grew even further in recent years with the happy addition of his three grandsons, who were so special to him.

Jeff was a man of incredible ingenuity and talent. He loved music from an early age and was gifted as an exceptional musician. His extraordinary ability to play the piano (by ear!) was something impressive that will be fondly remembered by many. Jeff was very handy and could fix, build or renovate anything and always had projects on the go. Jeff was a feisty character from the moment he was born, something that those around him found out very quickly!

Jeff was a devoted father to his kids, a loving husband, and a fun loving “Pa” our worlds have been rocked by the loss of this wonderful man. We will miss our fun family vacations, our Canada Day parties, our Christmas’ together, and spending hot summer days with his famous cocktail parties by the pool. Jeff lived a life of service and dedication to his family, and we are all so, so grateful for him and fortunate that he was ours.

Jeff was an incredible brother, uncle, cousin, nephew, role model and friend to so many. He will be missed by his colleagues and clients from London Drugs and TLD Computers, where he was a master of sales and information technology. We are so sad that he didn’t get the chance to make it to his retirement in August so he could finally take some well-earned time to truly relax. We are so proud of him, and love him so much for working so hard to ensure his family was taken care of. He was our problem solver, our confidant and example, our rock, guide and safe harbour. We all miss him so much.

Though he leaves us behind in this life, we know his spirit remains within us and we take comfort in knowing that he is with those who have gone before him. He has been reunited with his father (Wayne) father in law (Reed Blumel) his Gibb and Pitcher Grandparents, and most of all, his mother Alice who he loved, nurtured and cared for so well. We all learned the true meaning of family service and dedication in the way he cared for his mom. We know that she was waiting for him on the other side with a big chocolate cake and an even bigger embrace.

Our family would like to thank the doctors at Chinook regional hospital and the Foothills ICU for doing their best to save him, and a special thanks to Dr. Eric Wilde for helping our dad so much throughout his many health struggles.

A memorial celebration of Jeff’s life will be held at a later date this summer. Any donations you would like to make in his honour will be going to STARS air ambulance.

We will miss him so much, but know through the strength of our family, that his legacy will endure.

In our family, we never say “Goodbye” but rather “See you later”

See you later Daddy, thank you so much for everything. We will always love, remember and cherish you until we meet again someday on that sunny beach in heaven.

One Condolence for “GIBB, Jeffrey”