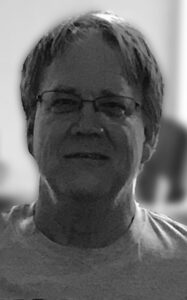 John David Lapins (Dave) of Lethbridge Alberta, beloved husband of Janet Lapins, passed away peacefully at Chinook Regional Hospital on May 8, 2021, at the age of 65 years.

David was born in London, Ontario, July 12, 1955. His parents (Karl and Kate) emigrated from Latvia after World War II. Dave grew up in Hamilton, alongside his two brothers (Peter and Andrew), attending Latvian camps in the summer, and spending time outdoors. Dave later attended Queens University where he studied Civil Engineering and met his wife, Janet, who was attending nursing school. After graduating, Dave and Janet moved to Edmonton, Alberta and eventually settled in Lethbridge in 1980. They raised three children (Kaila (Matt), John (Kim) and Andrea).

Dave was also the proud grandfather of Charlotte and Elsie. He had many hobbies and interests in between working and raising his family including curling, swimming and spending time outdoors. He was heavily involved with his kids swim teams as an official in various positions for both provincial and national level competitions. Dave worked on many civil engineering projects for Southern Alberta including the St Mary’s Spillway and Travers Dam along with many canals and irrigation projects to supply Alberta’s agriculture.

In retirement Dave spent his time with his family, travelling to the family cottage in Quebec, doing woodworking projects and most recently started playing the ukulele after a trip to Hawaii. He is predeceased by his parents, Kate and Karl.

Special thanks to the doctors and nurses who were involved in Dave’s care throughout his illness.

With respect to Dave’s wishes there will not be a funeral service.

One Condolence for “LAPINS, John”