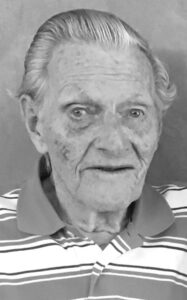 William Bates passed away peacefully in his sleep during a short stay in the hospital at the age of 91.

Bill was born in Lethbridge to Myrtle and Alvin Bates on September 9, 1929. A lifetime resident of the city, he worked at the Lethbridge Herald in the printing department and later had his own lawn cutting business. A fan and owner of a few vintage cars, he gave up driving in the 80’s and could be frequently seen on his bike cycling from one end of the city to the other!

Bill was Godfather to Wendy McDonald as he was good friends with her father George and mother Norma. Growing up Wendy remembers “Uncle Bill” and his uncle and aunt Ross and Sadie Thornton often coming over for card games with her parents. After Norma passed away, Bill and George spent much time together going for coffee, church lunches, and reminiscing about Lethbridge in its “hey day”.

Since George’s passing eleven years ago, Bill was a tremendous support to Wendy’s family attending most of Jack’s basketball and baseball games, and both boys’ graduations. He was a part of the McDonald/Spoulos/ Flexhaug family and was a fixture at family gatherings and our annual New West Show and Supper Boxing Day tradition! He was affectionally known as “Uncle Bill” to not only the families, but to the McDonald’s friends as well who came to know him at the baseball field and basketball gyms.

Bill was also an important part of the Morris family and enjoyed Easter, Thanksgiving and Christmas suppers each year with his cousin Robert, his wife Lora, and their son Addison.

In 2014 Bill moved into the Heritage Lodge where he was lovingly cared for. The staff at the Lodge spoiled him, the residents were so kind to him, and this became his new home. He loved the delicious meals, the proximity to downtown, and the warm, caring atmosphere. Prior to the lockdown, he was a part of a group of residents from the lodge who came each month to General Stewart Elementary School to listen to students read!

Bill was predeceased by his parents, brother Lyle, and cousins Robert T. Morris and David Marsh. He will be lovingly remembered by cousin Robert, (Lora) Morris and their son Addison, Goddaughter Wendy McDonald, her sons Joseph and Jack, the entire Spoulos and Flexhaug families, and cousins Marg and Dennis Foth, Martha and Gary McIntosh, and their families.

At Bill’s 90th Birthday brunch he remarked that T.V. was the biggest change he witnessed in his lifetime, and he enjoyed watching late night shows, hockey, baseball, and the Lawrence Welk show!

Bill was a gentle, soft-spoken man who always had kind words about everyone. We will miss his unique handshake, his nightly check-in phone calls, his quick wit, and his stories about Lethbridge past. At every social gathering he never failed to encourage everyone to “clink” their glasses and say “Cheers”; so, Uncle Bill, “Cheers” to you. We will miss you!

A private family burial will take place, and when it is safe to do, a Celebration of Life.