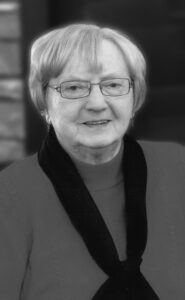 ANNE MARY PAZIUK, beloved wife of the late Nick “Mikolaj” Paziuk and mother to Richard Paziuk, of Lethbridge, passed away peacefully in the early morning hours with her son at her side, at the Chinook Regional Hospital of congestive heart failure, on Thursday, May 20, 2021 at the age of 94 years. She had fought and defeated Covid -19 and a number of problems arising therefrom and seemed well on the road to recovery yet again but the demands on her body were simply too great over the past two days.

In addition to her son Richard, Anne is survived by numerous nieces and nephews in Europe.

Anne was born in France and after the War, met Nick who became her lifelong love. They emigrated to Canada in 1950 to start a new life and endured many hardships in their new home. Nick eventually secured employment with Agriculture Canada, where he served for 31 years before retirement. Anne, in addition to making “home” a place of joy, held various secretarial and retail positions until Nick’s retirement in 1984, at which time they both enjoyed their life together gardening, camping, travelling the world and enjoying the fruits of their labours. Hawaii with close friends was their winter reprieve and a source of great comfort and many stories.

When Nick was stricken with Alzheimer’s and settled at St Michael’s Health Centre, Anne gave up their first and only family home in Lethbridge to move to Martha’s House, so she could be close to Nick and visit him when possible. When Nick passed away in 2008, Anne found her new family at Martha’s House and though the faces may have changed, she knew she was cared for and among friends. A very special thanks to the management and staff of Martha’s House for their care, love and concern for Anne over the years and to the residents she was pleased to call her extended family. You are all very special people and were in Anne’s thoughts to the very end.

Special thanks as well to the doctors, nurses and staff of CRH unit 5B who made Anne well enough to enjoy a too brief visit home in late April and to the various other units who cared for her throughout her time at the CRH. Your professionalism and compassion went far to make the best of a very difficult time and allowed Anne to pass on with peace and dignity.

Mom, you fought a long hard fight and kept a positive attitude to the bitter end. I know you are at peace now and with Dad and the rest of the family gone before. The memory of you and the life you both gave me will sustain me but you will be greatly missed. You were my anchor and my best friend. You will live in my heart forever.

At Anne’s request, no service will be held. Cremation has been entrusted to Cornerstone Funeral Home. Anne’s ashes will be spread as were Nick’s, so they will be reunited again.

In lieu of flowers, donations may be made in Anne’s name to Diabetes Canada (diabetes.ca/donate), The MS Society of Canada (mssociety.ca/donate) or a charity of your choice.