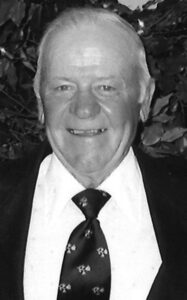 Phillip Stanley Wiest was born on September 16, 1932, in Enchant, AB, to Clarence and Edith Wiest. He was the third youngest of 15 and he was the last surviving sibling. Phil will be sadly missed by all his family and friends.

Phil was educated in Enchant. In his younger days he loved to play baseball and hockey, and especially loved any gathering of the Wiest clan, whether it was big or small! He was mainly involved in farming and truck driving and hauling fuel for his brothers. He took a few years off and did carpentry work on the Morley Reserve for 6.5 years. He gradually went back to farming around Calgary and Tofield, before settling back in Enchant in 1982. In 1995 they moved to an acreage inside the Lethbridge City limits, then to Monarch and then back to Lethbridge where Phil resided until his passing.

Phil’s main passion was his horses. He started on the local bush circuit in the 1950s and eventually moved up to the B circuit. He became a fixture at the Lethbridge & District Exhibition circuit, starting about 1960. He trained as many as 17 or 18 horses in the same season; among his favorites were Petit Four and Naptown. He was instrumental in developing a race track in Enchant. His horses took him across the prairie provinces as well as the U.S. One of his racing highlights was getting a young 16-year-old rider from Red Deer, who rode his first race for Phil in 1966. This jockey, Don Macbeth, went on to become one of the world’s top jockeys, riding in races such as the Kentucky Derby. Phil received many awards and trophies over the years and in 2006 he was nominated to the Lethbridge Exhibition’s Horsemen Wall of Fame.

We would like to thank the staff at St. Therese Villa Assisted Living Facility (level 2 East) who have done an excellent job taking care of Phil over the past 2.5 years. Your care and compassion towards Phil have been very much appreciated by the family.

A Public Viewing will be held from 2:00pm to 4:00pm, on Monday, May 31, 2021, at Martin Brothers Riverview Chapel 610 4 Street South, Lethbridge, Alberta. Please book a time to pay your respects by visiting www.mbfunerals.com and scrolling to the bottom of Phil’s obituary or call our office at 403-328-2361.

In lieu of flowers, donations may be made to the Enchant Community Club, Box 1927, Enchant, AB, T0K 0V0, or Rocky Mountain Turf Club 3401 Parkside Drive South, Lethbridge, AB, T1J 4B3.