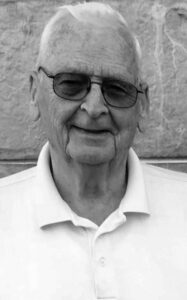 Kelvin entered this world at a little over 2 pounds in Cardston Alberta as the second son of Edwin and Fontella MacDonnell. Soon, Gaylord and Greg would also be welcomed into the family to join Val and Kelvin. They grew up in Hill Spring in the company of many uncles, aunts and cousins, and were known for their prankster ways.

Kelvin grew up working hard and playing hard. He loved camping, fishing, hiking, basketball and anything to do with the great outdoors. Joking around, teasing, and pulling pranks was always part of the fun.

Kelvin met the love of his life and eternal companion, Jean Marie Olshaskie, at a dance in Waterton. It was the beginning of a lifelong love of dancing. Together Kelvin and Jean raised 3 children, Trina, Mike and Julie. They all enjoyed their family vacations together, camping, traveling, fishing and swimming.

Kelvin enjoyed being a husband and Dad, but he really enjoyed being a Grandpa. He loved introducing the grandkids to water fighting, picnics in Waterton, and supporting them in their various sports. Together, Kelvin and Jean also made many trips to Idaho and Oregon to visit their grandkids.

Kelvin always worked hard. The job he loved the most was at the Lethbridge College as a Program Coordinator. The exact count of how many times he retired from the college is unknown, as he just kept going back.

Kelvin was a member of the Church of Jesus Christ of Latter-day Saints. His favorite calling was serving as Bishop. He loved the people of his ward and his neighbors, giving many hours of service to them all.

Kelvin lived a full and wonderful life, but his most admirable role was that of a Husband. He was devoted to Jean until his passing on May 22, 2021, just after their 63rd wedding anniversary. Their love and devotion to each other was immeasurable.

Kelvin is predeceased by his parents, Edwin and Fontella MacDonnell, younger brother Greg MacDonnell and Father and Mother in-law, John and Edith Olshaskie. He is survived by his loving wife, Jean, their children Trina (Guy) Peterson, Mike MacDonnell, Julie (Wes) Wolsey, nine wonderful grandchildren, of whom he was so proud, and seventeen very precious great grandchildren.

Kelvin is survived by two of his brothers, Val (Marjorie) MacDonnell, his younger brother Gaylord MacDonnell, his sister in-law Eva (Lyle) Vance, along with many nieces, nephews and extended family.

Kelvin’s family would like to thank the many friends and neighbors who have shown such kindness at this time.