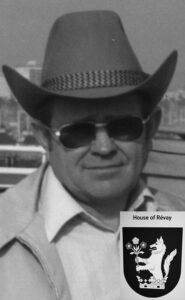 He is predeceased by his father and mother, Joseph and Antonia Ravoy as well as his siblings Stefan Ravoy, Anne Duraj, Joanna Zobell, and Joseph Ravoy Jr.

Louie emigrated to Canada with his parents when he was only four years old along with his older sister Joanna and younger brother Joseph Jr. and settled near Raymond, Alberta. After completing high school in Raymond, he travelled the United States on a Harley Davidson motorcycle. He then moved to Edmonton where he became a licensed pilot as well as a licensed airplane and auto mechanic. The knowledge had served him well when he decided to return to the family farm near Raymond. He was well equipped to fix anything that could and would break down.

Louie met the love of his life, Valorie Krisko, and they were married in 1952. He exchanged his Harley for her ring and so their life together began. Louie became well known in the area for being a “jack-of-all trades”. He became very skilled at welding and mechanics and helped many neighbors and friends in mechanical distress. Early in his farming career he had a terrible farming accident where he sustained head injuries and the loss of his right arm. Miraculously he recovered and Valorie soon became his right hand and together they raised five children. Because of his diverse interest from politics to geography, mechanics, war machines and you name it, he was always interesting to talk to. Many good discussions took place amongst neighbors and friends at the Ravoy family table. He continued farming, trucking and ranching until he retired and became an inspiration to many people who said he could do more with one hand than many could do with two.

Louie’s hard work paid off and he was able to retire and travel more of the United States for almost twenty years. Valorie recalls Louie helping people on vacation who had engine trouble.

Louie had a quiet but strong faith in God that helped him through the tough times and there were many. His family is left with much wisdom to draw from for years to come. He loved poetry and if you were fortunate he would recite Rudyard Kipling’s “The Ballad of East and West” to you. He always appreciated every blessing that came his way especially his wife and children. His sense of humor was truly a gift. Even in the last seven years of his life when he had dementia he was able to find humor in the simple things.

Louie was a faithful husband, father, grandfather and friend. He will be remembered by all who knew him.

“Thank you Louie for teaching us all how to be a better person by the way you lived your life.”

The Ravoy family would like to thank Dr. Tollestrup in Raymond and the entire medical team at Raymond Hospital who cared for Louie in his last days. A special thanks also to his nurse Janet and the rest of the team from Lethbridge Home Care. Your care was much appreciated.