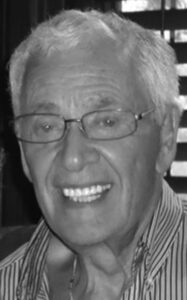 John Edward Keenan (May 1, 1932), died peacefully at home surrounded by his loving family on May 29, 2021. It was a gentle passing preceded by an incredible life. John leaves behind Elizabeth (Elsie), his devoted wife of over 60 years, his son David (w/ wife Liz) and daughter, Jennifer, and six beautiful grandchildren.

John was a true gentleman, a people person, and a community builder. He joined Canadian Airlines International in the early days of the airline industry and was a part of the golden age of air travel. His career spanned more than 35 years with the many successor airlines that followed.

John was well-known in the Calgary community for organizing great travel related events, including Hawaiian Days at the Chinook Shopping Centre, where hula dancers and flame throwers would be flown in to brighten up a cold Calgary winter. In 1981, John accepted a promotion with Canadian Airlines and he and Elizabeth moved to Lethbridge, Alberta. There they quickly integrated themselves in the Lethbridge community, with John serving as director of Rotary Club International and on the Board of Directors, and the President’s Advisory Board, of Lethbridge Community College.

John and Elizabeth made many wonderful friends in Lethbridge, but in 2006 made the bold decision to move to Toronto to be closer to their children. Once again, John embraced community and formed many new friendships. He was a loving husband and an amazing grandfather and will be missed by many. A life well-lived.

In lieu of flowers, donations may be made in John’s memory to Michael Garron Hospital Foundation. www.mghf.ca

may be placed at