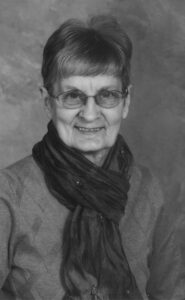 CLARA SUSANNA WILLMS, beloved wife of the late Arnold Willms, passed away peacefully at Good Samaritan Park Meadows Village in Lethbridge, Alberta at the age of 83.

She was predeceased by her parents, Frank and Annie Kroeker, her sisters Valida Wall and Marianne Kroeker.

Clara was born in Hague, a small rural town in Saskatchewan, on July 1, 1937. God graciously saved her at the age of eight, with her parents’ guidance. Most of her young years were spent in Ontario and then she moved to Alberta in September 1964 to attend Bible School in Coaldale. The following year, she moved to Pincher Creek, Alberta and met the love of her life, Arnold, and they were married on November 12, 1966. They moved to Lethbridge on a farm in the Summer of 1970. Clara worked at the Royal Bank as a bank teller and later as a finance clerk in Pincher Creek for three years and then for twenty-seven years in Lethbridge.

Clara, who was also called ‘Clarie’ by some family members, was a blessing to so many people. She was such a kind and loving person, and her love for other people and for her Lord and Saviour was so evident in her words and actions. She had a heart for missions and for those who did not know Jesus, that they might have the opportunity to come to know Him. Underlying all of this was her strong faith in the One who had saved her and sustained her through trials and difficulties, and brought her many blessings throughout her life.

A Funeral Service will be held on Monday, June 7, 2021 at 11:00 A.M. Clara will be laid to rest with her husband Arnold in Mountain View Cemetery.

The Funeral and Graveside Services will be livestreamed and may be accessed via Clara’s obituary on the Cornerstone website.