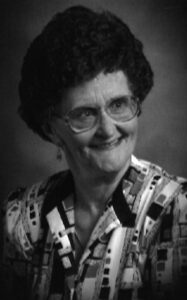 Mrs. Susan Hurlbut of Coaldale passed away peacefully at home on Sunday, June 6, 2021 at the age of 90 years.

Susan was born to parents Cedric Ivan Hadrill and Kathleen Mary Hadrill (Oliver) in London, England on November 3, 1930. She grew up in Little Oast, Sevenoaks, Kent in WWII. She then did her Midwifery training in Prestbury, England before practicing as a midwife for 2 years. She went on to get her R.N and practiced for 10 years before moving to Toronto, Canada in 1957. There she continued to work as a nurse and met her husband Donald Charles Hurlbut. Together, they had three children Nancy, Ken and Jennifer. In 1997, she retired and moved back to England to help raise her grandkids. In 2005, she and the family moved to Coaldale where she spent the remainder of her life. She was a devoted member of the Anglican Church of Ascension.

Flowers are gratefully declined. For those who wish, donations may be made to the Alzheimer Society of Canada, 40 1202 2 Avenue South, Lethbridge, Alberta, T1J 0E3.

One Condolence for “HURLBUT, Susan”