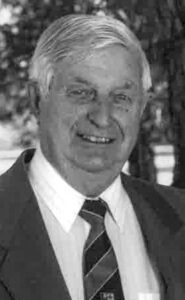 ADIN STAFFORD, beloved husband of Beryl Stafford, passed away at St. Michael’s Health Centre in Lethbridge, Alberta, on Sunday, May 30th, 2021 at the age of 87 years.

He is survived by his four sons: Mark, Glyn (Karen), Ian (Donna), Dean (Jinhee) also known as numbers 1, 2, 3 and 4. He will also be lovingly remembered by his seven grandchildren and nine great- grandchildren. He is predeceased by his daughter-in-law Teresa Stafford with whom he now sits.

Adin came to Canada from the United Kingdom in 1968 with his wife Beryl and family, settling in Edmonton. There, he worked at the University of Alberta Hospital for a few years until he moved to Ponoka, where he eventually served as the Executive Director of the hospital. Finally, he moved his family one more time to Lethbridge, serving as the Regional Director for Southern Alberta Mental Health until retiring in 1996.

Adin was an avid sportsman throughout his life. His true passion, as so many knew, was with rugby and this passion followed him wherever he went. He played throughout his youth, his military service in the UK, his work life and retirement and afterward, participated in coaching and on executive boards with the Lethbridge Rugby Club. He had a profound respect for the role rugby played in his life through the friends he made and the wonderful experiences he gained.

Most of all, Adin was known for his love of family and friends. He was a magnificent husband who loved no one more than his wife Beryl. He was a dedicated father who raised his boys in the light of integrity and love. A loyal friend who was always there in times of joy or need. He will be remembered with love, pride, and smiles.

As he wished, there will be no memorial service. A small family celebration of life will be held in his honour.

In lieu of flowers, donations may be made in memory to the Alzheimer Society of Alberta and Northwest Territories, #306, 10430 61 Avenue, Edmonton, AB T6H 2J3, (alzheimer.ab.ca)