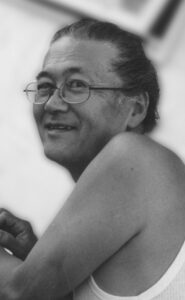 It is with great sorrow we regret to announce the passing of DENNIS TADASHI GOSHINMON. He was the beloved husband of Katie; best dad ever to Darla and Ron, Canako and Collin and Dawn and Kirk; big brother to his favourite, most special sister Diane and Pat; loving Papa/Grampa to Ricky, Blake/Willow, Seth/Nicole, Victoria/Conner and James, Ashley and Robyn; great-grampa to Kaydance and Bailey; and brother-in-law to Bill and Brenda and Jim and Sheila. He will also be missed by numerous aunts, uncles, nieces, nephews, cousins and course, all of his many, many friends.

Dennis was born in Coaldale to Dorothy and Nobby. Denny grew up in Hardieville, going to school in Lethbridge. His love of music inspired Denny to teach himself to play guitar, which eventually led to Denny starting in the band The Checkers. They performed through Eastern Canada and U.S. This is where the rockstar met the groupie. They were married in Ontario on October 28, 1963, before moving back to Lethbridge to start a family. While working and performing, Denny attended the U of L to obtain his Bachelor of Arts. Dennis worked for many years at both tv stations, the majority being at CFCN as a commercial artist/therapist (he always had someone in the chair sharing some thoughts) until his early retirement. He continued doing art work for many people and businesses around Lethbridge. He also continued to perform with many people and bands, entertaining many, many people.

Denny was a long time member of the Okinawa Society and the Bonsai Club, and was a humble student of the Buddhist temple One of the many things we saw in dad was his attention to people, no matter who you were. He made everyone feel special. He was a great listener and always had the right reply. Right up until the end, he wanted to know how “You” were. Never complaining. We would like to send a special thanks to the nurses for their care of Dad.

As in life, Denny preferred no fuss or attention, no pomp or flair. At his request, there will be no funeral. Instead, he would like everyone to love more, laugh more and live more!

In lieu of flowers, please donate to the cancer society or the charity of your choice.