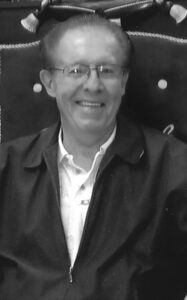 DAVID BOYD WATSON, of Coaldale, Alberta, loving husband of June, passed away peacefully at The Sunny South Lodge on January 19, 2022.

Dave was born on December 14, 1933 in Calgary, Alberta to Ian and Dorothy Watson. Dave was educated in Calgary and learned good work ethics early as he had to deliver the Calgary Herald early in the morning and still make it to school on time. During his teens, he also spent several years in the Reserve Forces of the Canadian Army in the motor division.

Dave’s career in farm equipment sales began with International Harvester in Calgary and over the years was employed by dealerships in Central and Southern Alberta. He travelled many miles over the years, rain or snow or shine to service his farm customers. Because of his friendly personality, he was often asked into the farmhouse for a cup of coffee and a chat which made him a perfect fit for this job. After leaving the farm equipment industry, he was employed by Woodwards, which later on became The Bay

After retirement, he could focus on the things he truly loved to do, such as camping, fishing, golfing and spending more time with friends and family. Dave and June were able to take many trips to Arizona to enjoy the sun with his sister Diane and her husband Doug. They also enjoyed their little casino trip getaways, especially the trips to Laughlin, Nevada with friends. A highlight of their travels, was a trip to Hawaii with the “Happy Hour” gang.

He treasured time with family and was so proud to talk of his children and grandchildren and their accomplishments. He will always be remembered for his witty sense of humour and his many stories and tales of life experiences. For most of his life, Dave could be found with a furry companion at his side. His love of nature and animals was evident.

He will be deeply missed by his beloved wife June, children Karen (Mo), David (Brenda), Michelle (Danny), sister Diane (Doug) Fraser, grandchildren Kayla (Nixon) Tse, Kaylen Barber, Jenna and Ethan Watson, Ryan and Tyson Pearce, and many nieces and nephews. He was predeceased by his parents and youngest sister Marion.

Memorial donations may be made to the Royal Canadian Legion Branch 4, 324 Mayor Magrath Drive South, Lethbridge, Alberta, T1J 3L7 or a charity of your choice.

A private graveside service officiated by Rev. Canon Erin Phillips will be held for immediate family on Wednesday, January 26, 2022 at 1:00 PM.