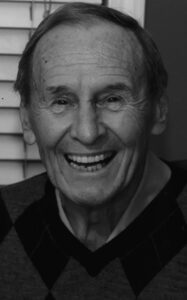 After a brief battle with cancer, our dear dad and grandpa, Paul Rusznak, passed away on April 5, 2022 at St. Michael’s Palliative Care unit.

Paul was born December 7th, 1934, in Monarch and moved to Lethbridge with his family as a young boy. In his early twenties, Paul went into the clothing business. After working for John Black at Black’s Men’s Wear for many years he became co-owner. He sold the business in the mid 80’s then moved on to a new and exciting career as a car salesman for College Ford. Throughout his more than two decades in car sales, Paul was salesman of the month and salesman of the year multiple times. He had a very special way of making his customers feel satisfied and always went the extra mile to ensure that they got the best deal possible.

Paul met the love of his life, Gaile, in 1964 and they were married a year later. Paul & Gaile always enjoyed the company of good friends. Whether it was creating and consuming unique meals with their gourmet dinner club or traveling to warm destinations. They spent 47 wonderful years together before her passing in 2013.

Paul was an avid golfer and a founding member of the Lethbridge Country Club, and he and Gaile and their kids enjoyed many years building memories there. Paul served his community with pride. Among other things, he was a member of Kinsmen and Kiwanis and served on the University Senate.

In his later years, Paul loved to go for coffee with the guys. He especially enjoyed spending quality times with his family and watching his favourite hockey team, the Calgary Flames. Paul spent his last three years at AgeCare Columbia where he continued to make new friends and put smiles on their faces.

Paul is survived by his three children, LaVerne (Paul) Krizan, Sheri Parsons and Robert (Sheri) Rusznak. Paul is also survived by six grandchildren who he adored: Michaela, Aiden, Robyn, Ryan, Jaden and Kylan. He will be dearly missed by them all.

A Prayer Service will be held at 6:00 pm on Friday, April 8, 2022, at MARTIN BROTHERS RIVERVIEW CHAPEL, 610, 4 STREET SOUTH, Lethbridge, Alberta. Those who wish may watch the service via livestream by going to https://www.mbfunerals.com/obituary/Paul-Rusznak and scrolling to the bottom of Paul’s obituary page.

A Funeral Mass will be held at 10:00 am on Saturday, April 9, 2022, at OUR LADY OF THE ASSUMPTION CATHOLIC PARISH, 2405 12 AVENUE SOUTH, Lethbridge, Alberta, with Father Kevin Tumback, celebrant. Those who wish to watch the Funeral Mass via livestream by going to https://www.tikilive.com/channel/allsaintsparish and selecting Paul’s service.

One Condolence for “RUSZNAK, Paul”