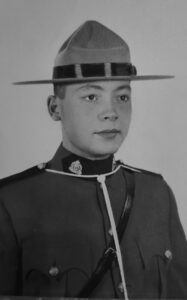 It is with profound sadness that we announce the peaceful passing of Chris Switzer, our Dad, Grandfather, Great Grandad, brother and cousin on the morning of April 4, 2022.

Dad was born Dec 15, 1931, in Grenfell Saskatchewan to mother Myra Winnifred Mitchell and Father Samuel Christopher Switzer. After graduation from high school Chris joined the RCMP and in 1951 was stationed in Prince George B.C. In 1954 Chris married Olive Harvey and son’s Kim C Switzer and Mark H. Switzer came along. Shortly after, Chris left he RCMP and took on the job as Territory manager for Sears for interior and central BC. Sadly, the marriage ended, and Dad, Kim and Mark moved to Burnaby where Dad joined the Sears main office in Mahogany Row, what he called the manager’s office hallway.

Chris married Merle Richardson in 1961 and in short order, April 4th, 1963, Dean B Switzer was born. In 1965 the family re-located to Lethbridge where Dad became the General Manager of the Hoyt’s hardware group which comprised 3 locations in the city. Merle (Mom) worked as the Operating room Head Nurse at the regional hospital. In 1975 Chris started Cardinal Muffler on 12 Ave south, his partner initially was Norm Ferguson who worked with him at Hoyt’s in the gun and rifle department. After leaving Hoyt’s and starting Cardinal Muffler, Dad owned Shady Lane Trout Farm in Welling, spent some time at Fording Coal operations and finished his retail sales career working with the Fairfield Family in their appliance business. Dad was a Life member of the Optimist club, started the Hike for Tikes walkathon and enjoyed time spent at the Elk’s and Chinook Club. In 1981 Cardinal Muffler moved to the current location, took on the Carline logo and eventually became Carline Muffler Switzer Automotive. Dad retired from the business in the mid 90’s. Life in retirement was spent in Mexico and Arizona in the winters, summers in the huge garden at their home and many days at Henderson Lake Golf course. Dad loved to sing and had a lovely baritone voice, they spent many enjoyable times over the years at the piano with the Campbells, Stitt’s and Uren’s. After Mom passed away Dad was not the same. He travelled to Spain, Ireland, Hawaii a few times and one winter in Arizona. His interest in travel waned and he sold his house and moved into the View for 4 wonderful years. As his health declined, Dad moved into St. Michaels and resided there up to his passing. He loved the girls there, played crib every day and enjoyed outings to shop and visit family on special occasions. Dad always commented the food was really good and called everybody who lived in his pod,” the rest of the inmates”.

Dad chose cremation and no service. His hope was that people remember him for the times they had together, and he would live on through his son’s and extended family.