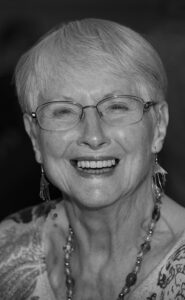 MRS. PATRICIA NORMA AMIES – or Pat – as she was most commonly known – was born in Croydon, Surrey on September 10, 1934 to Mr. and Mrs. Reuben Sercombe. She has one sibling, David (Heather), who is living in Australia, aged 90. Her father Reuben was in the Royal Air Force and was subjected to regular postings. Consequently, Pat attended several schools, notably Worthing High School for Girls and a school in Wilhelmshaven, Germany run by the British military for service children. In October 1953 she enrolled in the London Hospital Physiotherapy School and graduated in 1956 as a member of the Chartered Society of Physiotherapists of England. During her time at the London Hospital, she met, fell in love with and married David, a medical student. Their marriage lasted 65 years until her death.

David’s career took her to Nigeria, Cyprus, Jerusalem, Canada and Australia and their travels enabled her to experience over forty countries. Wherever possible Patricia practised her profession. Pat and David emigrated to Canada in 1974 and became citizens in 1976.

Pat’s hobbies and interests included dancing, choral singing, acting on the stage, quilting, dressage, skiing, water sports of all kinds, cooking, and bridge. Her great love was the theatre, and she took leading roles with several amateur societies. She proved so adept that she took the plunge and secured a number of roles on the professional stage in Edmonton, Calgary, Victoria and Vancouver as well as parts on both radio and television.

Pat’s final years were marred by arthritis and heart ailments. Mercifully her terminal illness was brief.

She died at home in her own bed on Friday April 8, much loved by her husband, family and their cherished pup, Yoshi.

A Funeral Service will be held at CORNERSTONE FUNERAL HOME, 2825 – 32 Street South, Lethbridge, AB, on Thursday, April 14, 2022 at 2:00 P.M. with Patrick Siedlecki officiating. The service will be livestreamed and may be accessed via Pat’s obituary on the Cornerstone website.