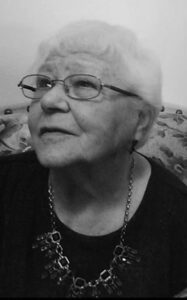 It is with heavy hearts that we announce the passing of our beloved Jenny Cooke at 95 years of age. Jenny passed away peacefully in Lethbridge, Alberta with family by her side on April 9, 2022.

Jenny was the first child born to Hendrika Zandbergen and Heine de Jong, on May 15, 1926 in Vroomshoop, The Netherlands. As Jenny grew up, she helped raise her five brothers and four sisters.

Jenny immigrated to Canada in 1952 with her first husband Henk and their two children, Herman and Rhea, settling in Niagara Falls, Ontario. After Henk’s passing in 1953 , Jenny met and married Ernie Cooke in 1955 in Cornwall, Ontario. Jenny and Ernie had two children together, Eddy and Cecil. When Ernie passed in 1959, Jenny was 33, and widowed twice. She moved her four young children to Thunder Bay to be nearer to family. After moving there, she worked several different jobs to support her family and the foster children she helped raise. She went on to marry two more amazing men, that she was forever grateful for having in her life.

Jenny’s four children went on to bless her with 11 grandchildren, 11 great grandchildren and two great, great grandchildren. One of her biggest joys was watching the family grow. Jenny loved to knit, especially slippers for family, friends and overseas missions as well as sending and receiving beautiful cards and letters. She loved a good game of Rummikub and even at the age of 95 could give you a run for your money. She also loved music, especially Jim Reeves, to which she sang along to right up until her passing. She even taught many songs to the wonderful staff at Cedar Creek Adaptacare where she lived the last six months of her life.

Jenny lived her last six months in Lethbridge, Alberta near her many relatives. She told everyone that the trip from Thunder Bay to Lethbridge in the motorhome with her sons Herman and Eddy and granddaughters Kristen and Kelly were some of the most fun days she ever had. She did not want that trip to end.

She is survived by Herman and his wife Emma, Rhea, Eddy and his wife Shaunna, daughters-in-law Roxanne, Lori and Kathy and her many descendants.

She was predeceased by her son Cecil, grandson Cory, son-in-law Jim, several of her siblings, parents, in-laws, and her four husbands. She will be greatly missed.

“Fear not, for I have redeemed you: I have called you by name.

One Condolence for “COOKE, Jentien (Jenny)”