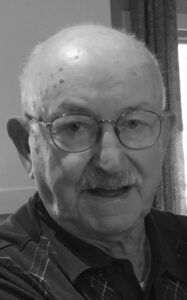 Mr. Walter Pashuk, beloved husband of the late Mrs. Beverly Pashuk, passed away peacefully on April 12, 2022 at the age of 98 years.

Born in Poland, he immigrated to Canada in 1932 with his mother, brother and sister to join his father, who was already in Canada. The family settled in Enilda, Alberta. Shortly thereafter, their father was killed in a train accident. The family then moved to Magrath where Walter was raised. Life was difficult for the family; they worked in the beet fields and sold fresh vegetables to make a living.

Dad was trained as a welder, but his career took him in a different direction. He started working at Alberta Canning Company in Magrath, then rose to the position of Manager. He then held management positions at food processing plants in North Collins, New York and Vauxhall, Alberta. His position before retirement was at Empress Foods in Lethbridge.

He was an athlete. In early adulthood, he was an excellent baseball pitcher and was drafted by the Brooklyn Dodgers’ farm team. Since the pay was poor in baseball, Dad chose to stay in Magrath and continue working. Baseball was not his only interest. Dad earned many awards for golf, curling, hunting and fishing. In fact, for several years, he held the provincial record for the largest rainbow trout caught in Alberta. He held memberships at both Henderson Lake Golf Course and Magrath Golf Course, and he golfed until he was 97.

Dad was creative. During his career, he designed and reconfigured equipment to streamline food processing. In retirement, Dad spent hours in his garage on various projects, including creating furniture, making picture frames and building more than one hundred bird houses, many of which he donated to the Magrath Golf Course. Dad was most generous with his time and talents. Even into his 90’s he could be seen cutting lawns, shovelling snow or fixing things for his family and friends.

He was predeceased by his parents; his wife of 58 years, Beverly; and his siblings Helen (Parasiuk) and Victor.

The family wishes to extend sincere appreciation to the medical staff at Chinook Regional Hospital and to Dr. R. Strank for the excellent care they provided to Dad.