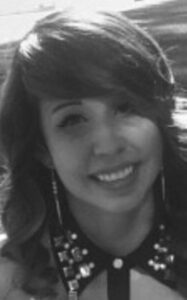 We are deeply saddened to announce the passing of our dear Chelsie on April 8, 2022, at the Lethbridge Regional Hospital due to medical complications. The family is very appreciative of all the Doctors and nurses for her medical care. Chelsie was born on Sept 12, 1994, in Cardston, Alberta to Angie Eagle Plume and Todd Shade. Chelsie was a survivor of a rare childhood cancer, bilateral Retinoblastoma, cancer in both eyes. The SickKids Hospital in Toronto was the only place in the world that could treat this rare form of cancer. She was diagnosed with it when she was 17 months old. She spent the next 3 years of intensive cancer treatments, chemotherapy, cryotherapy, and laser therapy in Toronto. She lost sight in one eye but maintained good vision in her other eye.

Traveling back & forth to the SickKids Hospital, her second home became the Ronald Macdonald House, all the families at RMH became her other family. Chelsie made great friends with everybody; her best little friend was Nelson, a little boy from Australia who lost vision in both eyes due to this cancer. Chelsie knew his disability; she would take him by the hand & walk around with him making sure he didn’t bump into anything or trip over something. She celebrated some major holidays and her 2nd birthday at the RMH. Many thanks to Dr. Brenda Gallie and Dr. Helen Chan of Toronto.

Chelsie attended school in Cardston and completed some high school courses at the RMH in Toronto. She graduated from high school in June 2013. She left home at the age of 18 to attend the Lethbridge College on a scholarship she won. This was the KCC Derek Mandzura Memorial Scholarship, a scholarship for cancer survivors. She was the youngest individual to ever win the individual top prize.

Chelsie was a very talented artist. She held various jobs until her passing. Her involvement in sport activities was limited due to her lack of 3D vision. Chelsie attended some powwows as a traditional dancer. Growing up in a rodeo family, she entered the sheep riding event at all the rodeos her family contracted.

Chelsie was a loving auntie to all her nieces and nephews, she enjoyed babysitting & playing with them. Chelsie was known as all time “animal lover”, whether alive or stuffed. She rescued a severely brain damaged puppy whom she named “Cowboy” and raised him to be a good working ranch dog. Chelsie always wanted a pet snake and a pet mouse but was not allowed to have these creatures. She would rescue a wayward mouse that came into the house before her brothers could kill it. They would be up on chairs with weapons in their hands while she would pick up the mouse by the tail and take it outside to safety.

As a toddler she accumulated 3 garbage bags of stuffed animals from the SickKids Hospital, RMH (Calgary and Toronto), Calgary Children’s Hospital, family, and friends. She never got over the love of stuffies and currently owns a huge collection and several animal onesies. Predeceased by Stanley, Cowboy, Kitty, and Blue: survived by Benny, Felisha, Crybaby, and CeCe.

At the tender age of 16 she became the loving mother to her son Angelo. Angelo inherited the same eye cancer as Chelsie. With her adopted Mom and Dad, Barry and Ronni in tow, they went to live in Toronto for 3 months for aggressive treatments followed by years of travelling to Toronto. This was extremely challenging on such a young mother; however, she preserved and became a strong young lady.

Chelsie maintained strong relationships with her maternal family, no matter the distance and/or time it always continued. She enjoyed being with her Wolf Child/Eagle Plume family, attending numerous pow-wows and travels where she gained lots of friends. She loved going to their family home often and spending time with all her cousins, especially cruising and listening to Red Hot Chili Peppers. Chelsie loved going on adventures, picnics, and animals. Chelsie will be deeply missed, especially for her affectionate laugh, silliness, and warm hugs.

The family apologizes for any names that may have been missed.