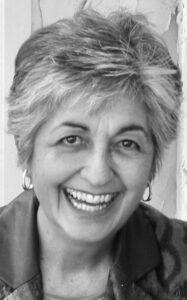 With sadness and gratitude, the family of Catherine ‘Cathie’ (née Christou) Thrall of Lethbridge, Alberta announces her peaceful passing surrounded by family on April 10, 2022. Cathie is predeceased by her dear husband, Ralph Thrall Jr. and is survived by their four children (Ralph III, Erin, Eric and Chris) and nine grandchildren. There is joy in describing Cathie’s life, as she embodied love, openness and a warm, giving nature that enchanted those around her.

Daughter to Christos and Anastasia Christou, Cathie was greatly enriched by the language, dance, music and food of their Greek heritage. A gregarious child, she also enjoyed piano studies, skating, singing and was known to juggle oranges and tap dance at family gatherings. As a young adult, Cathie ventured to Edmonton where she earned a B.Sc. and B.Ed. from the University of Alberta. She taught English and Home Economics in Calgary and later in Lethbridge where she married and raised a family.

Cathie was a selfless mother and encouraged creativity and intuition over accomplishment. She espoused a balance of the physical, mental and spiritual realms. In Cathie’s adult years, she cherished the Anglican and First Baptist church communities. She sang in the church and Joybells choirs and often visited seniors’ homes to share music. Cathie loved to golf, play tennis and spend time with her walking group. She co-founded the Textiles Guild at the Bowman Arts Centre and never ceased to appreciate visual art and design, taking classes at the Banff Centre, Red Deer College and at California College of the Arts. Cathie embraced the cultural richness of her community. She and Ralph hosted artists, musicians and many other guests at the McIntyre Ranch.

Cathie was passionate about friends and family, and was greatly energized by those around her. Celebrations were highlights, including annual summer picnics with the extended family. Cathie had a unique ability to connect with people, displaying compassion in all of her interactions.

Some say that Cathie wore rose-coloured glasses and indeed that it how she viewed the world. Cathie’s grace, her loving and playful essence remained during her final days with Alzheimer’s. Her caregivers referred to her as ‘Happy Cathie’. She continued to dance whenever the spirit moved her. Cathie’s wonderful smile always lit up the room and will forever shine in the hearts and minds of those who knew and loved her.

A Memorial Service will be held in Lethbridge, Alberta, with details to be announced at a later date.