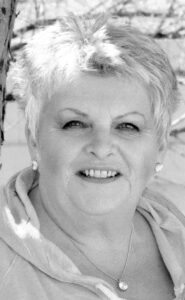 BARBARA KAY SANTONI (née Wheeler), of Lethbridge, beloved wife of the late Danny Santoni, passed away peacefully in her sleep at home, on Thursday, April 14, 2022 at the age of 73 years.

Besides her beloved husband Danny who passed away only a month before, Barb was predeceased by her parents Vincent and Ester Wheeler, parents-in-law Pietro and Esther Santoni, her brother Jim (Ivy) Wheeler, her sisters-in-law Rosi Bonora and Arlene Wheeler.

Barb was born on November 23, 1948, the middle of five children. Barb met Danny Santoni in 1967 just after completing college. Danny was too shy to ask Barb out, so he had a friend call her first. He met all of the criteria Barb had set in her mind for her husband when she was five years old – he was handsome, he was Italian, Danny wasn’t a “stupid name”, and his last name ended in an “i”. They were engaged on Christmas Eve 1969, and were married on August 8, 1970. They had one son, Michael in 1974. Barb’s early life was spent working for the City of Lethbridge in various roles. In her later life, Barb was a doting Nonna and enjoyed knitting, crocheting, sewing, gardening and painting.

A Celebration of Barb’s Life will be held at CORNERSTONE FUNERAL HOME, 2825 – 32 Street South, Lethbridge, AB, on Friday, April 22, 2022 at 12:00 P.M. If anyone wishes to share a story or memory, there will be an opportunity at the service.