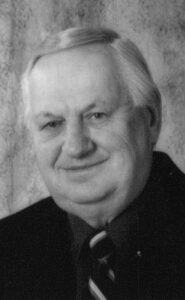 It is with profound sadness that the family of WILLIAM (BILL) ANDREACHUK announce his passing on Sunday, April 17, 2022, just shy of his 95th birthday.

Bill was the devoted and beloved husband to his late wife Joyce Andreachuk for 67 years. In retirement, they enjoyed snow-birding to Arizona where they spent time with friends. In Lethbridge, they loved walking around Henderson Lake, one-upping each other at crossword puzzles, and gathering with family in their beautiful backyard where Bill would tell stories from when he sold Ganong chocolates on the road.

He was the proud father of Lori Andreachuk (Harlow Otto), Randy Andreachuk (Pamela), and Leslie Meli (Joe). Bill was a remarkable Gramps. He will be deeply missed by his grandchildren Lindsay Meli, Ashley Meli, Mitchell Andreachuk (Chelsea Gallagher), and his three furry grandpups Coco, Gigi, and Lola.

Bill was born in Coalhurst, Alberta and is predeceased by his parents Andrew and Annie Andreachuk who immigrated from Ukraine and his brother Andrew Andreachuk (Joyce). He is survived by his sister Annette Myers (Tim).

Bill loved sports. He was a player, coach, and fan. He played hockey for the Lethbridge Native Sons Grizzley’s when his team won the Alberta Championship, he then went on to coach minor hockey. But, most of all, Bill loved baseball. He played senior fastball and baseball as a catcher for the Lethbridge Cubs and the Reds. He coached his son’s little league team to victory at the Alberta Championship in 1967. He and Joyce never missed a Toronto Blue Jays game. Bill was active in the community. He was a founding member of the Henderson Lake Golf Club in 1946. He belonged to the Kinsmen Club where he served as Chairman of Publicity for seven Sportsman’s Dinners.

Bill worked as the Advertising Manager at the Lethbridge Herald Newspaper for 34 years. This carried over into his daily routine of reading newspapers. Even when his vision faded, he never missed a day and had the paper read to him aloud.

Respecting Bill’s wishes, a private family Celebration of Life will follow at a later date.

Special thanks to Amber Kane, Cece Garner, Charmaine Dykslag, the Pharmacy team at London Drugs, Dr. Amatto, Dr. Plotnyk, Dr. Saleh, and the nursing staff at the Chinook Reginal Hospital. Flowers are gratefully declined. For those who wish, we encourage donations to the charity of your choice in support of Ukraine.