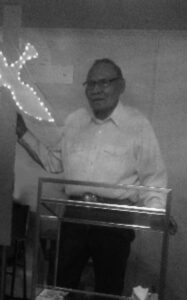 Pastor Alex C. Hunt Jr, 88 went home to be with his Lord and Savior on April 12, 2022.Alex was born in Cardston, Alberta at the Blood Indian Hospital to the late Alex Hunt Sr. and Ida Mills.

After his mother passed at a young age he was raised by his paternal grandparents, Vincent Hunt and Roundeyes until their passing when he was 17 years old. Shortly after he met the love of his life Bernice, they got married and started a family together in the Fort Whoop-up area. He took pride in making sure his family’s needs were met and because of this he found a passion for the many trades he managed over the years. Dad competed professionally in rodeo for a number of years and with hard work and dedication he became a contestant in rodeo across North America, including the Calgary Stampede.

Later in life he established himself in farming crops and ranching alongside his son Andrew, where they found success through hard work which was a virtue he wanted to pass on to his kids. He then re-entered the rodeo scene to encourage and help train his boys which helped them win a number of contests over the years including two world championships by his son Andrew. Our father was a humble man who greeted everyone as his brother or sister in Christ. He was a man of great faith who shared the gospel with whoever he could, friends and visitors alike. He was a foundation of faith for his family and church where he could be found doing his other passion in life, spreading the Words our Pastor. As an advocate to the people of the Blood Reserve he served as a board member for Voice of the Bloods which led to him serving as a counselor to the band where he made lasting bonds with various figures off the reserve which extended to the Municipal, Provincial and Federal governments. These relationships allowed him to further support Christian events off the reserve.

We apologize for anyone we missed. Also like to send a special thanks to Dr. Steed and the Raymond medical clinic the nursing staff at the E.R, Raymond Hospital. Thanks to the staff of the Medicine Shoppe Pharmacy.

A Funeral Service will be held at 11:00 AM, on Friday, April 22, 2022, at the First Nations Christian Fellowship Church.